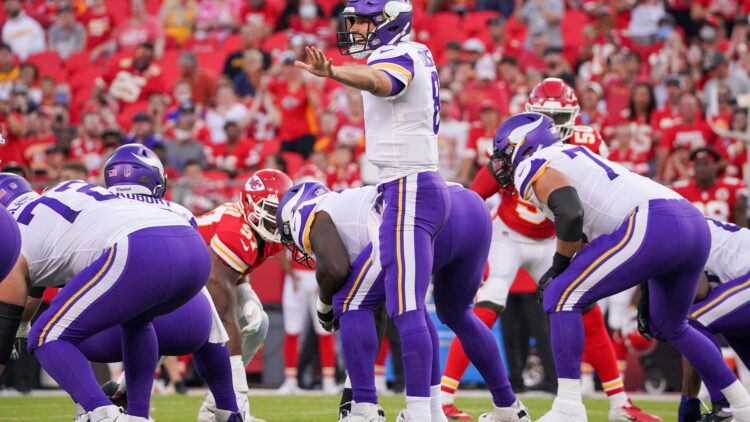 A lot has been said about the Vikings offensive line. The struggles of the group date back about a decade. In Mike Zimmer’s tenure, that part of the team was always the weakness. PFF’s Mike Renner released his preseason offensive line rankings, and the Vikings finally are on an upward trajectory.

The last time the purple and gold franchise cracked the top 20 of the rankings was in 2017, which was their best season as a team since 2009. In Cousins’ tenure, the Vikings line ranked at or near the bottom of the league in three out of four years. The lone exception was in 2019, the only year Kirk Cousins led the team to the playoffs and even won in New Orleans against the heavily favored Saints. Having solid play from the offensive line in the two seasons with the most success in the last decade can’t be a coincidence.

Additionally, the Super Bowl-winning teams always have a good offensive line. All of those teams are different, but this is the one part of championship-caliber teams they all have in common.

The 19th-ranked unit lands in a tier named ‘At Least One Good Tackle,’ arguably the Vikings line’s strength. Renner had the following to say:

“This could sneakily be the best offensive line of quarterback Kirk Cousins‘ Vikings career. Much of that, though, comes down to the development of the team’s 2021 first-round pick, Christian Darrisaw. Darrisaw earned a 71.9 overall grade on 652 snaps last season and got stronger as the campaign wore on.”

This shows how bad some of Cousins´ teams were in protecting the veteran passer. Brian O’Neill and Christian Darrisaw are one of the better offensive tackle duos in the NFL.

The 2021 rookie Darrisaw missed the full offseason workouts and the preseason because of an injury. Once he was healthy enough to play, he was a noticeable upgrade over Rashod Hill. This year, a jump in production from Darrisaw can be expected because he is finally healthy and can participate in all practice sessions.

His running mate Brian O’Neill is the one constant in the line. Since his rookie year in 2018, he has been an excellent right tackle. In 2021, he was rewarded with a trip to the Pro Bowl. O’Neill also received three votes for the All-Pro team at his right tackle spot.

However, landing at spot 19 despite a good tackle duo means that the inside is still a question mark. The front office around new general manager Kwesi Adofo-Mensah tried to add some key pieces to keep Cousins upright. He signed Chris Reed from the Colts and Jesse Davis from the Dolphins. Not only that, but he also picked Ed Ingram, the offensive guard from LSU, in the second round.

Cleveland and Bradbury are the clear frontrunners for their respective position. Unless someone can surprisingly overtake them, they are two-thirds of the interior offensive line in Week 1 against the Packers. The final piece at right guard, however, is a big question mark. Davis and Reed split the first-team reps in OTAs, while Ingram took the reps with the second-team. As a rookie, he has to earn the job. If he can’t, Reed or Davis will start and might be replaced later in the year by the rookie after he gets more acclimated to the professional game and shows that he can be an upgrade over the starter in practice.

The combination of bringing in new talent and, hopefully, good coaching can result in solid play in 2022. If the tackles are indeed the franchise tackles and Cleveland continues his dependable play, 60% of the line will be in good shape in the near future. Bradbury is in his contract year but added weight and could still develop into the player Rick Spielman envisioned when he selected him in the first round. The right guard spot should be an upgrade over the 2021 starter, Oli Udoh. The young group out of talented high draft picks could be a big surprise in 2022.