The Difference Between the Vikings and Super Bowl Champions 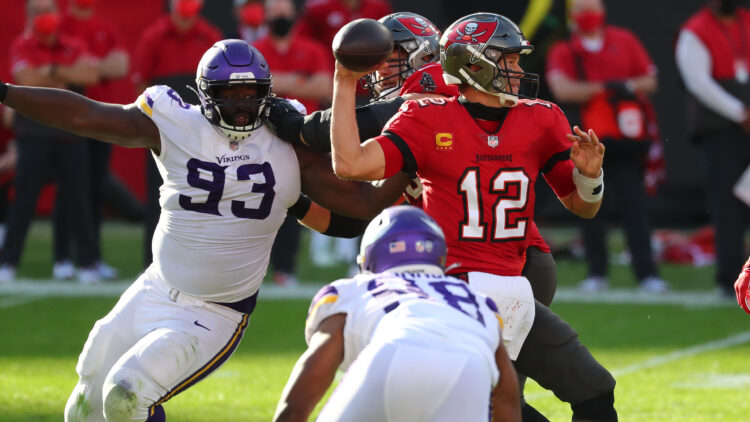 A lot of different teams win championships in the NFL. Solid quarterback play combined with a great defense, elite offense, and average defense, no formula guarantees a Super Bowl. However, a formula makes it seemingly impossible to win the big game, and the Vikings followed that exact formula far too long.

In 2020 and 2021, the defense was not worthy of a contender. However, Mike Zimmer’s Vikings had some excellent defenses. In 2019, the franchise had a good offense and a good defense. Offenses that were worse than the 2019 Stefanski coordinated one have won titles. Defenses worse than the 2019 Vikings have won in the league, too. So what was the difference between Super Bowl champions and the Vikings in recent years?

If we look at recent champions, they all had one thing in common – elite offensive lines. Per PFF, the offensive line of McVay’s Rams was the seventh-best in the NFL. The Vikings, meanwhile, were 23rd. PFF came to the same conclusion as Vikings fans for years.

“O’Neill was the lone Vikings lineman to play snaps this season who earned a pass-blocking grade above 65.0, and that is where Minnesota’s biggest area to target improvement needs to be.“

PFF about the Vikings offensive line

Inadequate pass protection for a pocket passer is a recipe for disaster. Per ESPN’s team pass block win rates, the Rams were the best team at protecting their quarterback with 68%, while the Vikings ranked among the worst teams. The 54% win rate was good enough for the 25th spot. The Bengals were even worse than the Vikings, and that’s why they lost in the final game of the season against the Rams. Aaron Donald against a lousy pass blocking line is not ideal.

The 2021 season wasn’t just an isolated season with stats like this. In the years before, the same thing happened.

Tom Brady joined the Tampa Bay Buccaneers, and they immediately won the Super Bowl. The team was stacked, and the offensive line wasn’t any different. Per PFF, the line ranked fifth. Brady has been susceptive, especially to interior pressure in his career, and probably considered the state of the offensive line of suitors during free agency. Minnesota meanwhile ranked 26th. Once more, the quality of offensive lines vastly differs. PFF’s comment about the Vikings issues sounds similar to 2021, which is really concerning that the front office didn’t do enough to fix it.

“The offensive line has been an issue for multiple years now in Minnesota, and it remains one following a 2020 season where they graded out as the 28th-best pass-blocking offensive line in the NFL. Once again, it was the interior of the offensive line where most of the issues popped up.“

PFF about the Vikings’ offensive line after the 2020 season

Patrick Mahomes and his Chiefs lost in the big game to the Bucs. Mahomes was running for his life all game. The reason wasn’t that it was a bad line. It was because multiple starters missed the game. In the regular season, PFF ranked the line as the 11th best in the league. Mahomes played behind some excellent units so far in his young career, just like in 2019, when the team won a championship.

The Chiefs have beaten the 49ers in the Super Bowl. PFF ranked the Chiefs at the 16th position, and the Vikings were 19th. The Vikings had an offensive line that was not in the bottom quarter of the list and immediately won a playoff game. That is something to remember for the upcoming season.

The difference to the Chiefs, however, looks smaller than it was, especially in pass protection. The Chiefs had a good pass blocking line and struggled in the running game, while the Vikings were clearly better in run blocking for Dalvin Cook and struggled against the pass rush. The NFC Champion 49ers, who have beaten the Vikings in the divisional round and would later lose to Patrick Mahomes in his first Super Bowl, ranked 14th, despite missing elite left tackle Joe Staley for most of the season.

In 2018, the Patriots won the Super Bowl. PFF ranked their unit fourth in the NFL, as they knew how to keep Brady protected. Across the line, the Patriots had excellent linemen.

“Another year, another well-oiled machine blocking in New England. Shaq Mason finished the season as PFF’s All-Pro right guard and all five starters were among the top-75 graded offensive linemen in the league.“

PFF about the Patriots offensive line in 2018

The Vikings meanwhile ranked 29th and PFF had some devastating comments about the unit.

“Outside of left tackle Riley Reiff – who himself had some ugly outings, most notably Buffalo – the Vikings didn’t have a single offensive lineman with a top-80 grade this season. Their interior was quite easily one of the worst in the league. Tom Compton, Pat Elflein, and Mike Remmers combined to give up 18 sacks on the season.“

PFF about the Vikings’ offensive line in 2018

The champions Patriots had all five starters in the top-75 offensive linemen, while the Vikings had one in the top-80. The Rams, who lost to the Patriots, ranked 6th.

The 2017 Vikings gave the fans an exciting season that ended in a disaster when the team played against the Philadelphia Eagles, the future Super Bowl champions, in the NFC Championship Game. The title game featured possibly the best offensive line matchup in the recent Super Bowl history.

The Patriots ranked third in the PFF rankings and weren’t even the best unit in the final game of the NFL season, as the Eagles ranked first. To no surprise, the offenses had a true shootout in a 41-33 Eagles win in U.S. Bank Stadium. The pass rush couldn’t get to the quarterbacks until Graham had a strip-sack against Brady and decided the game that way. The Vikings’ offensive line ranked 22nd in that season.

Former general manager Rick Spielman invested a lot of resources into the offensive line. In 2017, he signed Riley Reiff and Mike Remmers in free agency and selected Pat Elflein in the third round. In 2018, Brian O’Neill was a second-round pick, followed by the first-rounder Garrett Bradbury in 2019. Ezra Cleveland was selected in the second round in 2020, and Christian Darrisaw and Wyatt Davis early in 2021. Either talent evaluation or coaching didn’t work, maybe even both.

Kwesi Adofo-Mensah continued the trend of investing a lot in Kirk Cousins’ protection, hopefully with more success. Ed Ingram, a second-round selection, Jesse Davis, Austin Schlottmann, and Chris Reed are new additions to the team in an attempt to fix the problematic part of the team. All Superbowl teams have different strengths and weaknesses, but they all have a good offensive line. The Vikings have to finally get it right if they want to have success in the NFL and want to become Super Bowl champions for the first time in franchise history.