Is Kirk Cousins Comfortable in the Kevin O’Connell Offense? 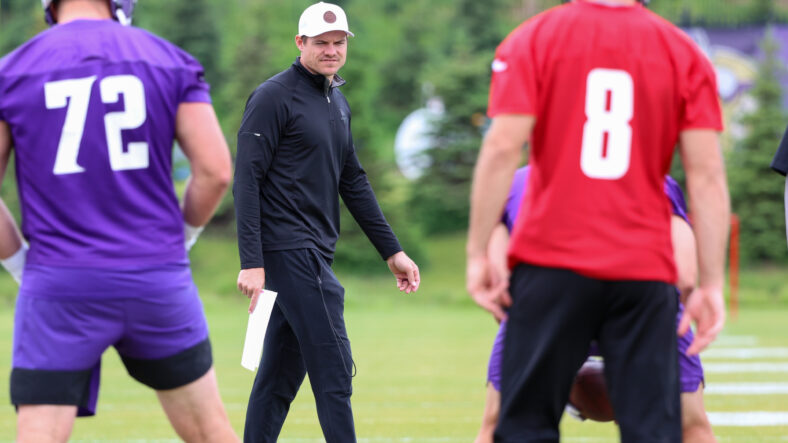 At 3-1, the Vikings find themselves atop the NFC North. Making matters even more encouraging is that the Bears are next on the schedule, so there is a great chance at getting to 4-1. Just about any Vikings fan would be happy with that record. That being said, one thing I’ve been asking myself is whether Kirk Cousins is comfortable in the Kevin O’Connell offense.

After 4 games, Cousins has done pretty good, but he hasn’t played as well as in recent seasons. What’s been going on?

Let me be clear that I’m not suggesting there is conflict between the two. Rather, I’m merely pointing out that Cousins hasn’t been playing as well as he normally does.

Indeed, his stats aren’t as formidable as we’ve grown accustomed to seeing. Cousins has some so-so numbers: 63.1%, 1031 yards, 6 TDs, and 4 INTs. His completion percentage is a fair bit lower than his career average, a robust 66.8%. Moreover, his 6.6 yards per attempt is more than a yard below his career average at 7.7 yards.

Obviously, things are still early, but it is notable that he hasn’t yet had a dominant game. His QB rating is currently sitting at 84.1. For the past three seasons, he has been up over 100.

At various points, Cousins’ passes have been just a touch off. One thinks of the missed TD pass to Justin Jefferson when Minnesota’s star WR was open. Unfortunately, the ball was behind #18, and he couldn’t secure the grab. One also thinks of the times when the clock is nearing zero and the offense is still getting set up. Again, these are moments that cause one to wonder about how comfortable Cousins is.

Perhaps some of these concerns are unfair. After all, the Saints have a strong defense, and it is still very early in the year. Nevertheless, I still wonder about the connection between HC and QB.

Kirk Cousins is being paid a ton of money – $31,416,668, to be precise – and Kevin O’Connell was hired to help this offense reach its potential. Many pointed to O’Connell’s history with Cousins after the hire was made. In theory, O’Connell should help Cousins get to the next level. Plus, this is an offense that is loaded with skill. The QB should thrive.

At this stage, Cousins’ per-game average consists of 1.5 TD passes, an interception, and a touch more than 250 passing yards. Overall, pretty pedestrian. The team has yet to surpass 30 points in a game.

Following the game, O’Connell spoke about Minnesota’s red zone offense: “Yeah, I think offensively we’ll know first and foremost we got to finish some red zone opportunities that we had. I feel like there were some critical moments there where maybe instead of three, we had some opportunities there for seven.”

Cousins, for his part, said he was disappointed in the red zone offense: “There was one series the third quarter I thought was the most disappointing one. The delay of game, which is on me. Twice I think Justin was open for touchdowns and we didn’t connect.”

Both the QB and HC are realistic in their assessments. Minnesota left some points on the field. We should be thankful that Greg Joseph went 5/5 on his FGs, but he shouldn’t have to kick so many.

Something we can watch moving forward is how this team performs in critical moments: long third down plays, in the red zone, and late in each half. Performing in these critical situations often makes the difference between a win and a loss.

Furthermore, we should be looking for an offense that gets into and stays in a rhythm. The opening drive yesterday was brilliant, but the Vikings struggled to maintain the balance as the game progressed.

Kirk Cousins and Kevin O’Connell are two of the most important people when it comes to whether this team can go far this season. They’ll need to continue eliminating these issues so that Minnesota can reach its potential in 2022.