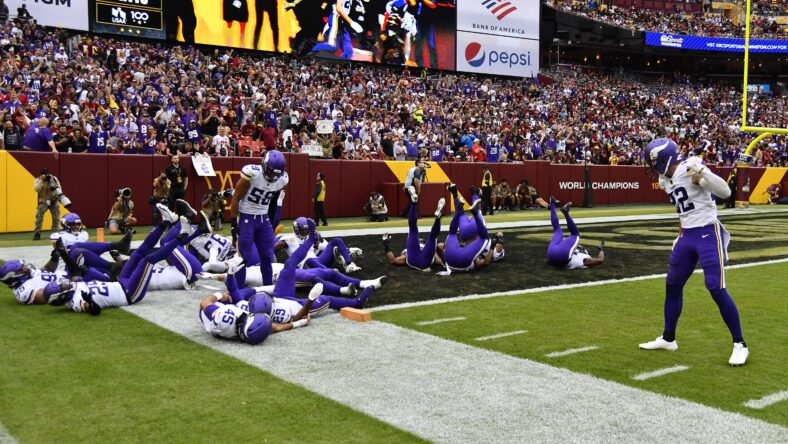 Injuries were not a mammoth problem for the Minnesota Vikings before the bye week, but the state of play has changed in recent weeks.

Already battling the second-worst passing defense in all of football via passing yards allowed (267.3 per game), the Vikings must now manage a litany of injuries. And that’s down the line on the CB depth chart, starting with Cameron Dantzler.

After that, it’s been a parade of injuries to Vikings cornerbacks, including maladies for rookies Akayleb Evans (concussion) and Andrew Booth (knee). And heading into Week 12 — in a game that Minnesota must win to prove the dreadful Week 11 loss to Dallas was an outlier — the Vikings may be down to a CB4 acting as a CB1.

Evans and Booth haven’t been ruled out versus the New England Patriots on Thanksgiving, but their prognoses aren’t peachy.

Ordinarily, a DNP (did not practice) on a Wednesday wouldn’t be a massive omen, but Minnesota has a short week, turning around to play four days after losing to the Cowboys. Evans and Booth not practicing on a Tuesday before a Thursday game is a bit foreboding.

If Evans and Booth are ruled out, the next man up is Duke Shelley, a veteran defender who showed up big against the Buffalo Bills in Week 10.

The Vikings added Shelley five days before the regular season began, and the 26-year-old may start on Thursday night. Shelley has played 11 defensive snaps in 2022, so his sample size is not robust. But he did notch 625 snaps for the Chicago Bears from 2019 to 2021. He has a little bit of starting experience, starting six games in 30 total opportunities.

In Chicago, Shelley registered 53 tackles, seven tackles for loss, three passes defended, and no interceptions. Shelley played about 40% of all Bears defensive snaps in 2021 en route to a 100.0 passer-rating-against. Here’s his Pro Football Focus resume:

Of course, “starter Shelley” won’t last long — unless he’s a genuine baller — as Dantzler should return in a few weeks and the injuries to Evans and Booth aren’t major. Still, the promotion versus New England would be a big deal for the former 6th-Rounder from Kansas State.

Thankfully for Shelley and the Vikings sake, the Patriots don’t employ monsters-of-rock wide receivers. New England’s arsenal of Nelson Agholor, Kendrick Bourne, Jakobi Meyers, DeVante Parker, and Tyquan Thornton is one of the tamest in the NFL from a talent standpoint. It won’t be an easy day for Shelley and friends, but the menu could be worse.

The Vikings are three-point home favorites versus New England.