Vikings Called a Contender — with a Weakness 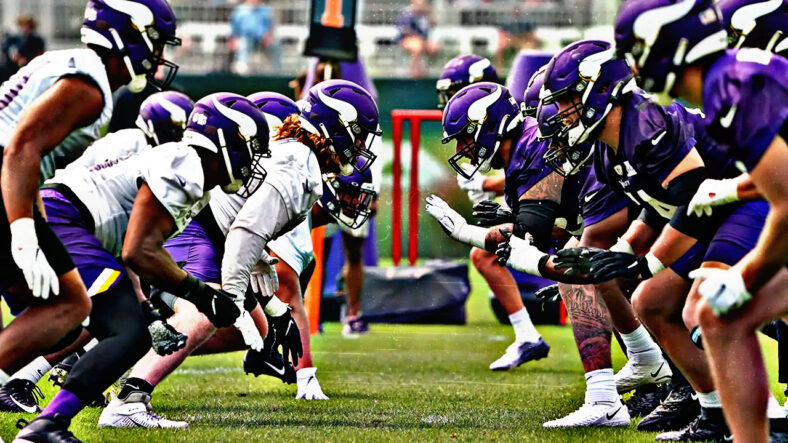 Bill Barnwell from ESPN released an article about the weakness of all contenders. Surprisingly, the Vikings were part of it. Even the most optimistic enthusiasts of the purple team don’t view the team as a contender at this point. However, Barnwell used an algorithm to pick 14 teams, ESPN’s FPI, the Football Power Index.

FPI is described on the ESPN website as “a measure of team strength that is meant to be the best predictor of a team’s performance going forward for the rest of the season. FPI represents how many points above or below average a team is. Projected results are based on 10,000 simulations of the rest of the season using FPI, results to date, and the remaining schedule.”

The Vikings rank 13th with 9.2 wins. The Bills are the highest projected team with 10.9 wins, so that number is conservative. 54.4% are the Vikings’ playoff chances, and 30% to win the division. The Packers, meanwhile, rank as the third-best team in the league.

After missing the playoffs in back-to-back seasons, even the slightest optimism surrounding the organization is welcomed. Barnwell named the biggest weakness for each of the 14 teams. The Vikings’ Achilles’ heel is once again the offensive line — the same old problem. The franchise can’t seem to find a solution, despite the struggles dating back at least to the beginning of the Mike Zimmer era. Barnwell about the line:

“Same as it ever was for the Vikings, who have seemingly been attempting to solidify their offensive line for most of the past decade. They certainly have invested plenty of picks into line help over the past few years, but the only upper-echelon starter they can count on is right tackle Brian O’Neill, who made it to his first Pro Bowl a year ago.”

Indeed, no other team in recent years invested more draft capital in the offensive line than the Vikings. In the last five drafts, the franchise spent two first-rounders for Bradbury and Darrisaw, three second-round picks for O’Neill, Cleveland, and Ingram, and Wyatt Davis was a third-round selection. With those investments, the offensive line should be a strength of the team. In reality, however, the line is still a weakness.

O’Neill, the right tackle, is one of the better players at his position in the NFL. Especially in pass protection, he rarely allows pressures, QB hits, and sacks. He went to his first Pro Bowl in 2021, a well-deserved honor.

The right guard was a big problem for the Vikings in 2021 and in years past. Oli Udoh started there and committed a league-high 16 penalties. To replace him, general manager Kwesi Adofo-Mensah signed Jesse Davis and Chris Reed in free agency.

He also drafted Ingram in the second round out of LSU. To this point, Davis is the front runner to start in Week 1 at that spot. Ed Ingram is starting to get some reps with the first team in training camp, and his ceiling is a lot higher. He should usurp Davis. The question is just when it will happen. Udoh, meanwhile, fights for a roster spot as a backup tackle.

Center Bradbury is, despite his first-round draft stock, the biggest concern in Minnesota. His training camp is a disaster so far. The Vikings even seem to move Chris Reed from guard to center in case Bradbury’s struggles continue.

Ezra Cleveland, on the left guard spot, has been a solid player. He has to take a step forward to be worth the second-round pick.

The Next Trent Williams?

Left tackle Christian Darrisaw is the key to the Vikings line in Barnwell’s eyes: “The key player is 2021 first-rounder Christian Darrisaw, who ranked 67th out of 68 tackles in pass block win rate a year ago across his 10 starts. Public perception of Darrisaw was more optimistic about his debut campaign. If he takes a step forward in Year 2 and becomes a solid left tackle, the Vikings can at least count on having solid pass protection on the edges. Anything more consistent in terms of interior protection would be a bonus.”

Darrisaw was an absolute bully in the run game. At times, he struggled in the passing game, but he certainly looked a lot better than the statistics show. The step forward is no longer a theory. Reports out of training camp suggest that it’s already a reality.

Darrisaw drew comparisons to the biggest star at the left tackle position, Trent Williams. The player of the 49ers was phenomenal last season and a big part of his team’s success.

Darrisaw was always expected to take a step forward, as he missed a big part of 2021. He didn’t participate in any offseason workouts, training camp, or the preseason and then missed the first six games. Unfortunately, he had to undergo a core muscle surgery and later a second procedure. The missed time put him in a bad position.

This season, he is healthy and in great shape. Everyone in the organization is raving about the former first-rounder.

Continued improvement from Darrisaw and a fixed right guard spot give fans hope to see the best offensive line in years. The center position is still a big issue, and despite the optimism, the right guards have to prove to be an improvement first.