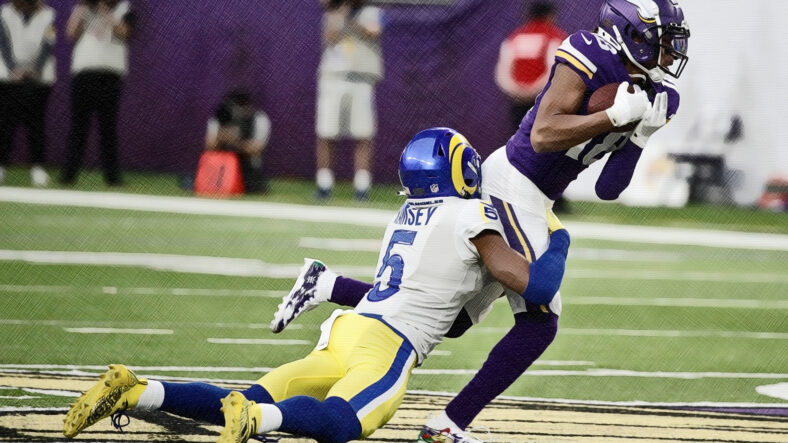 Minnesota Vikings wideout Justin Jefferson will embark on Season Three in September, the first in his career outside the confines of a “run-first offense.”

His pace via receiving yards (3,016) and touchdowns (17) is already phenomenal — even in that run-first offense — tallying more receiving yards than any player ever in a player’s first two seasons and the fifth-most receiving touchdowns of all-time in the same timeframe. Jefferson is also the most targeted WR in NFL history through the first two seasons of a player’s career, so “run-first” be damned, right?

This week, Jefferson revealed to The Ringer the most difficult cornerbacks he’s faced in his first two years. For the most part, the responses are unsurprising.

Ramsey was mentioned by Jefferson foremost, almost by default, as the Los Angeles Rams corner is considered the best in the business. Think Darrelle Revis a decade ago.

Jefferson’s rival ranked first in the NFL among CBs per Pro Football Focus grade, scoring a blistering 84.4. Ramsey and the Rams won a Super Bowl in February, knocking off the Cincinnati Bengals in a rather exciting championship showdown.

Ramsey is recovering from injury this offseason and is expected to be ready for Week 1 when the Rams host the Buffalo Bills, who are oddsmakers’ top choice to win the Super Bowl in 2022.

Jefferson and Ramsey have squared off once to date.

In the 2021 PFF rankings mentioned above, Lattimore ranked 10th among all CBs — about four PFF points higher than Vikings corner Cameron Dantzler.

Like Ramsey, Jefferson and Lattimore have battled once — a Christmas spanking courtesy of the Saints in New Orleans a year and a half ago. It was the game when New Orleans mind-bogglingly scored seven rushing touchdowns against Mike Zimmer’s dying defense.

Jefferson and Lattimore will face each other again in 2022, this time across the ocean in London. Minnesota and New Orleans meet in England on October 2nd, a “home” game for the Saints.

Lattimore was a part of both Saints teams that lost to the Vikings in the 2017 and 2019 playoffs, two walk-off sorrows for New Orleans.