RIP to the Vikings Run-First Offense 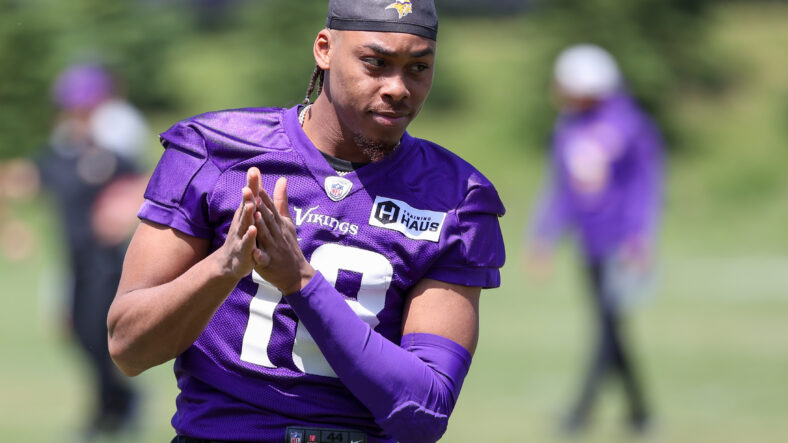 During the Mike Zimmer era for the Minnesota Vikings, the franchise ranked as follows, per year, for percentage of run plays on offense:

Those rankings average to about the 12th-most in the NFL since 2014, at least according to annual rankings.

But now Zimmer isn’t attached to the Vikings, as the enterprise opted for the services of Kevin O’Connell in February, a younger, pass-happier skipper from the Los Angeles Rams.

And if O’Connell’s best football player, Justin Jefferson, is correct, the run-first nature fancied by Zimmer is kaput. Jefferson spoke with NFL Network‘s Patrick Claybon this week and opined on the new offense, “Our offensive style, it’s not a run-first offense anymore. Just us being able to put different people in different positions and distribute the ball. We’re just excited to start it up, really. We want to see how this season really turns out for us.”

Interestingly, if one scrolls up to examine the rush-play percentage rankings, the Vikings were in optimal form during seasons they ran the football most. Yet, with Zimmer’s departure, Minnesota figures to inherit a Rams-like style that balances passing with rushing and doesn’t live under a banner of “run-first.” To a degree, the Vikings setup worked with Zimmer as Minnesota owned the NFL’s 10th-best record during his tenure.

A new day is coming, however. The Rams ranked 19th in rush-play percentage last year, a season in which they won the Super Bowl. Force-feeding Dalvin Cook “just because” is over. Minnesota will instead throw the football more. Fans shouldn’t perceive the 2022 Vikings as “run and shoot” or “air raid,” but they will promote balanced playcalling if the 2021 Rams are a reasonable indicator of future performance. O’Connell was the offensive coordinator in Los Angeles.

Of course, this should be music to Jefferson’s ears — probably why he’s exalting the obituary of run-first — as the Rams afforded wide receiver Cooper Kupp the utmost targets last season. Kupp led the NFL with 191 targets in 2021, the most by any player since 2015. Jefferson could realistically match or beat the total if O’Connell has his way.

The Vikings ranked 17th in the NFL per offensive efficiency in 2021.