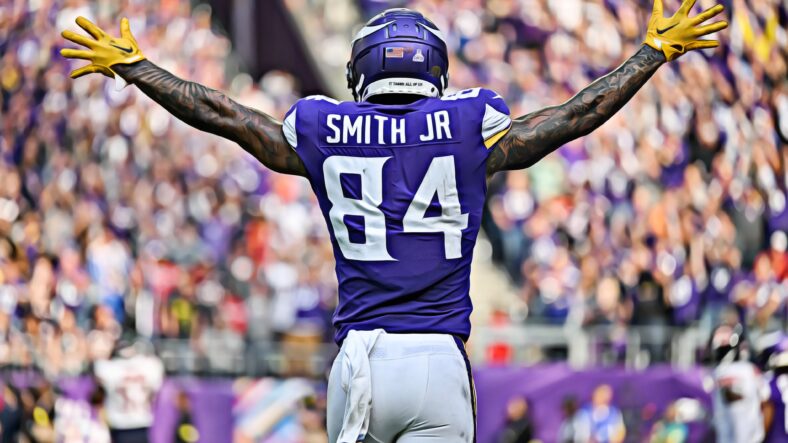 This is the Vikings probability meter before Week 6 against the Miami Dolphins.

FiveThirtyEight decided after the Vikings win over Chicago that Minnesota was the 9th-best team in football with the 6th most-likely odds to reach the playoffs.

The Vikings must now play .500 football (6-6) in the next 13 weeks to stamp a playoff ticket. Doing so would result in a 10-7 record, likely enough to earn a 6th or 7th seed in the NFC playoff dance. And, of course, that’s just the “basement” for playoff projection. The Vikings could rattle off 12 to 13 wins and take the division.

Lo and behold, the Green Bay Packers bungled a game in London, their first-ever trip across the pond for a regular season tryst. The New York Giants handed the Vikings an olive branch, and now Minnesota solely leads the NFC North.

The Vikings playoff odds rose substantially, and they’re even favored to win the division.

Minnesota’s odds per sportsbooks of reaching the postseason increased after Week 5, as the Vikings stand atop the NFC North, the Packers, Cardinals, and Rams lost, and teams don’t generally crumble after 4-1 starts.

This site leans heavier on wins’ and losses’ impact on the postseason. It doesn’t factor in predictive, intuitive measures like FiveThirtyEight. It considers the Vikings as honest-to-goodness playoff contenders. According to the site, the Vikings are the fourth most-likely franchise to reach the postseason. When the season began, the site listed the Vikings at 43%.

The Vikings take on the Dolphins in Week 6 at Hard Rock Stadium.