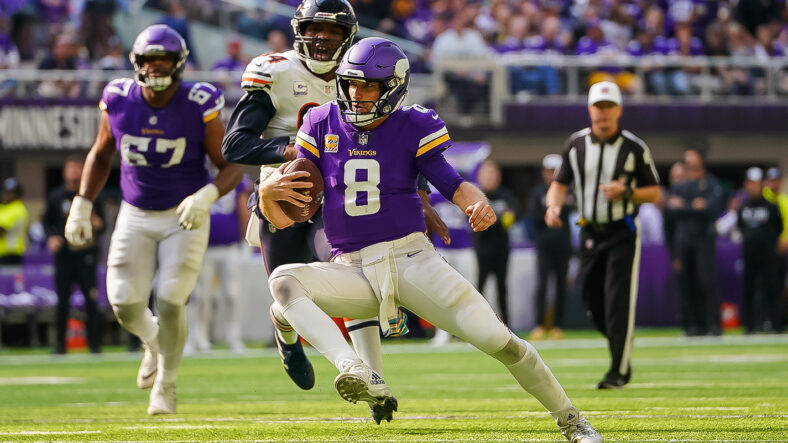 The Vikings climbed to 4-1 atop the NFC North after a typical NFC North-style win over the Chicago Bears in Week 5. Minnesota outlasted Chicago, 29-22.

1 – You can interpret the Vikings hot start in one of two ways. a) They have an upcoming reckoning against a good team who will expose their shortcomings. b) Any win is marvelous, and right now, the Vikings are a good team becoming great (or a good team getting really good).

2 – Kirk Cousins continues to author game-winning drives — just like his naysayers asked for over the last five seasons — and Minnesota is winning accordingly. It may be time to shelf the he doesn’t have a clutch gene talking point.

3 – The Bears only made the game spooky — it’s close to Halloween soon, right? — in the 2nd Half because Justin Fields is faster than a roadrunner. He repeatedly extended drives due to his mobility and speed. And, yes, this has been Minnesota’s defensive kryptonite for about 20 years.

5 – The Vikings continue to play gruesomely in 3rd Quarters. They’ve been outscored 33-6 in 2022 during the 3rd Quarter. That will catch up to them. They’re the anti-Golden State Warriors in that regard.

6 – Aside from the Dantzler grab-away, Cousins’ 3rd Down scamper in the 4th Quarter was unquestionably the play of the game.

7 – The Vikings responded to thru-four-games woes on 3rd Down by converting 12 for 15 versus the Bears. They were also 4-4 in the redzone. Without improvement in those parameters, they would’ve lost. Period.

8 – Minnesota dominated the Time of Possession battle by over 12 minutes. When that happens, a team should win by 2-3 scores.

9 – For much of the next week, you’ll read about “is Adam Thielen underutilized in this offense?” Listen, this is the trade-off when Justin Jefferson is fiendishly targeted. Pull the 2021 Rams stats and compare Cooper Kupp’s targets to everyone else on Los Angeles’ roster. This is the price paid when Jefferson is targeted like prime Calvin Johnson. Players like Thielen are ignored at times.

11 – For the first time — in a long time — the Vikings stifled a team’s rushing attack. That’s noteworthy. It felt like a stepping stone to the next building block on defense, probably the secondary firming up. We shall see.

12 – The Vikings offensive line, particularly the pass protection, continues to impress. They’re not perfect — nobody asked them to be — but they’re average-to-decent, and that’s what fans have asked for annually in the last 10 years.