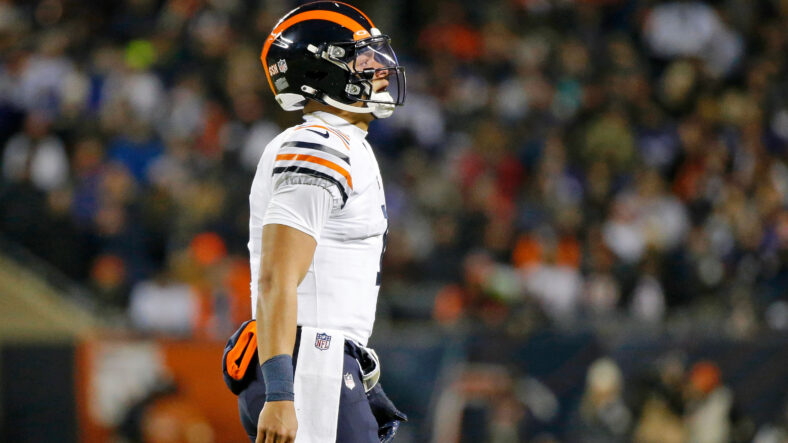 Through four weeks of the 2022 NFL season, the Minnesota Vikings have lost just one game. That was an embarrassing performance against the Philadelphia Eagles in primetime on Monday Night Football. Jalen Hurts is a very good quarterback. Justin Fields has a similar set of tools. The latter absolutely can’t hurt Minnesota this week.

Coming into the season, Jalen Hurts looked like a player on the rise. With a trajectory pointing straight up, Philadelphia’s signal caller appeared ready for a breakthrough. To this point, that has been the case. The Eagles are 4-0, with Hurts orchestrating an offense that hasn’t missed a beat.

There should be very little expectation that Fields looks similar when he comes off the sideline at U.S. Bank Stadium on Sunday, but that doesn’t excuse Minnesota needing to gameplan for a quarterback with a unique set of tools.

Obviously, the comparisons between Fields and Hurts come down to their abilities as dual-threat quarterbacks. Minnesota was gashed through the air and on the ground by Hurts. He threw for 333 yards while scrambling 11 times and adding two touchdowns on the ground. Fields has rushed at least seven times in each game this season, but he’s topped 50 yards only once and has found paydirt just a single time.

The Vikings come into this contest knowing that Fields’ deficiency lies in his arm. He’s not a good passer, and his weapons are lackluster, to say the least. Giving up plenty of pressure, the Bears offensive line should create ample opportunity for Minnesota’s defense to put Fields in less-than-ideal situations. Rather than allowing the quarterback to dictate action as Hurts did, the Vikings must force Fields’ hand by controlling the pace.

It’s not a mistake that the Minnesota Vikings find themselves as seven-point favorites at home on Sunday, mainly due to the talent gap between these two teams. Fields can certainly point to a lack of talent around him when trying to dissect his own struggles, but it takes only one standout game for a quarterback to regain confidence. Having already faced a dual-threat talent this season, Ed Donatell needs to have his defense dialed in and not allow this one to be a launching point for Fields.

There’s no reason that the defensive front should have trouble keeping Fields in check on Sunday, and while he’s coming off his best passing yardage of the season, it’s a great opportunity for Minnesota to create a reality check.