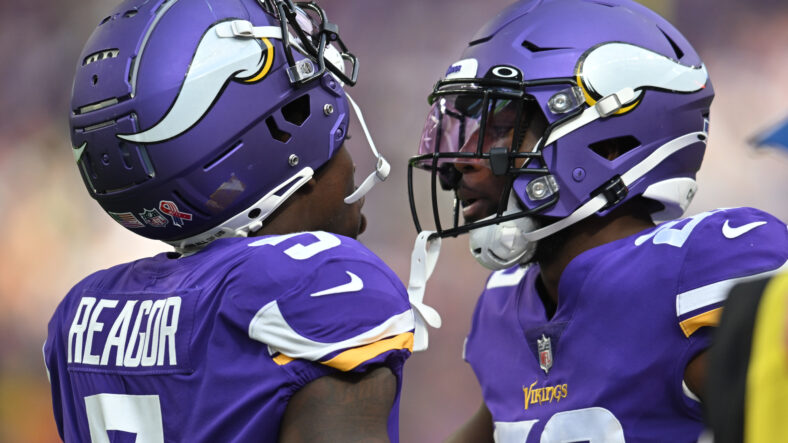 The Vikings face the Eagles in their Week 2 matchup after taking care of the Packers in the season opener with a nearly flawless game. Aaron Rodgers and his Packers lost the game 7-23. It was also the debut of head coach Kevin O’Connell, who became the fifth Vikings head coach to win his first game. The game will take place on Monday night and features some interesting storylines.

Can Cousins Continue His Hot Streak?

Vikings Passer Kirk Cousins played in nine games against the Eagles. During his time in Washington, he faced them as a divisional opponent. Since he became a full-time starter in 2015, Cousins has gone up against the Eagles eight times. His passer rating in those eight games was 105.2. He scored 18 touchdowns and threw just five interceptions, and totaled 291.1 passing yards per game.

In two games against the Eagles as the Vikings signal-caller, Cousins managed to record a ridiculous passer rating of 125.6. He scored five passing touchdowns in those games and averaged 317 passing yards. In his five games in Philadelphia, his rating is 112.1. No quarterback in NFL history had a better rating. In his nine starts against the Eagles, Cousins-led teams won six.

Cousins also started hot into the season, as he completed 23 of 32 passes for 277 yards, two scores, and no turnover. The Vikings have a good chance to win the game if their quarterback continues to play at that level.

Can Someone Cover Justin Jefferson?

The Packers game indicated that the answer is no. The talk about Justin Jefferson in the Cooper Kupp role took place all offseason, and the first game didn’t disappoint. Jefferson recorded a career-high 184 yards and added two scores. Most of his damage came in the first half.

Teams always try to contain him while treating him like an average receiver, and it always backfires. His production is now enhanced in an offense in which the passing game is the focal point, and he’s the focal point of the passing game. The Packers didn’t find an answer and O’Connell schemed him against players like edge rusher Preston Smith or rookie linebacker Quay Walker.

As long as the Vikings are dictating the coverage against Jefferson, there’s no stopping him. However, if the defenses focus on him too much, Dalvin Cook, Adam Thielen, Irv Snith, and K.J. Osborn will torch them.

The big story, of course, is Jalen Reagor’s comeback to Philadelphia. Howie Roseman, the Eagles general manager, wanted to add a wide receiver in the 2020 draft. On the board, there were still some excellent wideouts. The obvious choice was LSU’s Justin Jefferson. Also available were guys like Tee Higgins, Chase Claypool, and Brandon Aiyuk. Roseman, however, selected TCU’s Jalen Reagor.

In two seasons with the team, Reagor recorded under 700 yards and just three touchdowns. Philadelphia’s ruthless crowd didn’t help him keep his confidence. It always felt like he didn’t feel at home. Vikings GM Adofo-Mensah traded for him as the new punt returner and a backup wideout.

Everyone said that he needed a fresh start, and he got it. Reagor didn’t appear on offense in his first Vikings game and returned one punt for seven yards. If the Vikings and Kevin O’Connell have some plays for him up their sleeves, it would be a nice time to unleash them. Making Philly pay for how they treated him is probably at the top of Reagor’s bucket list.

The top pick of the Vikings draft class is set to play his first career NFL game. A knee injury prevented him from playing against the Green Bay Packers in Week 1. Now fully healthy, Cine will be the backup safety and rotate in on three-safety defenses.

He’ll replace either the nickel cornerback in a ‘big nickel’ package or even a linebacker. It depends on what exactly the Vikings want to do. He provides speed and explosiveness. His skills fit well in any defense. Another role of his will be on special teams. Depending on his performance, his role could expand later in the season.

One Teams Can Leave the Game as a Contender

One quick look at the NFC standings explains this one. Most supposed contending teams lost. The Packers, Cowboys, Cardinals, Rams, and 49ers are all 0-1. Only the Buccaneers and Eagles are 1-0 of the 2021 playoff teams.

The Vikings didn’t make the playoffs, and just a few people in the national media expected a big season from the purple team. However, the Vikings had such a great game against the Packers that they are already seen as a contending team by some. Another strong performance, including a victory, and the Vikings are close to the top of contenders on many lists. The same is true for the Eagles.