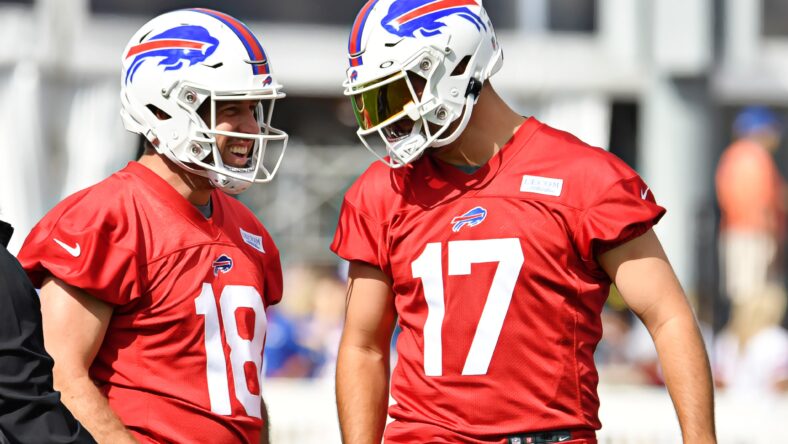 VikingsTerritory’s Purple Rumor Mill is a two-day chronicle each week. All the week’s rumors are lassoed and plopped in two spots — articles on Saturday and Sunday — for review. Today is the November 12th edition.

Rumor: Josh Allen hasn’t practiced all week and is unlikely to play vs. the Vikings on Sunday.

Indeed, Allen hasn’t practiced this week — never a good sign for a QB1 — but he’s curiously listed as questionable on the final injury report.

“These days” in the NFL, teams tend not to have a problem ruling out a player if he’s not healthy enough to play. Because, you know, safety first. Ergo, that would indicate Allen is truly 50-50 for the Vikings game in Week 10.

Because Allen has not practiced and Keenum is an adept QB2, we formally predict that Allen will not play. However, the questionable status on the injury report leaves this one up in the air.

Our guess? Keenum gets the nod Sunday.

Rumor: Irv Smith is probably in his final stretch with the Vikings.

For better or worse, this one is true.

Smith was supposed to be the next big thing at tight end, replacing Kyle Rudolph and adding an incredibly athletic asset in the middle of the field. But between injuries — he missed all of 2021 and will miss more than half of 2022 — and drops, Smith will likely play for a different team in 2023.

His contract expires at the end of the season, the Vikings just traded for T.J. Hockenson, and Smith can earn more money elsewhere.

Beyond the shadow of a doubt, Hockenson is the Vikings future at TE. Smith is not.

Well, Tillery hasn’t been very good — like ever — in four NFL seasons. Folks know him because of his draft stock, chosen in the 1st Round by the Chargers in 2019.

But this is his Pro Football Focus resume:

He was a reservist player in 2022 with the Chargers before his release. He might get some waiver-wire attention from teams, making it unlikely that he falls to the 31st hole for the Vikings.

And would Minnesota even want him? Whichever team takes the plunge must operate under the pretense that Tillery is misunderstood — or Los Angeles ruined him.