Kyle Rudolph Still in the Mood to Pester Saints 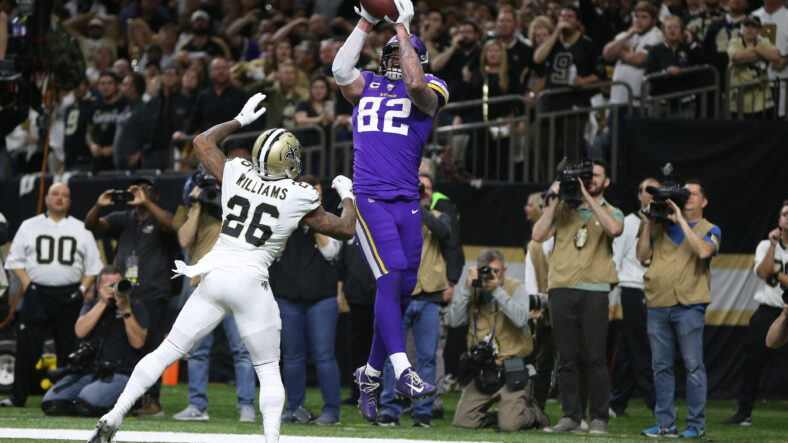 Kyle Rudolph graced the Minnesota Vikings rumor mill for a couple of months after the longtime Viking teased a return on a couple of different occasions. But no cigar as Rudolph decided on the Tampa Bay Buccanneers as his new home, chasing a title down in Florida with Tom Brady.

And Rudolph will have intimate knowledge of the NFC South, spending 11 seasons in the conference with the Vikings and New York Giants. The Notre Dame alumnus famously walked off the New Orleans Saints, who are a member of the NFC South, in the 2019 playoffs.

On Saturday, Rudolph tweeted a reference to the game, teasing New Orleans and connecting the Vikings and Buccaneers franchises.

Yes, Rudolph will wear #8 in Tampa Bay — a weird change of pace after 10 seasons in jersey #82 with the Vikings.

Saints fans reacted angrily and sarcastically on Twitter, with some calling Rudolph a “clown” and others using “circle it on the calendar” logic. The Saints and Buccaneers are natural rivals, whereas the Vikings-Saints feud blossomed in 2009 when New Orleans knocked off Minnesota in the NFC Championship. The teams never liked each thereafter because the Saints were discovered as “Bounty” culprits, concocting a program designed explicitly to injure then-QB Brett Favre. Head coach Sean Payton was suspended for an entire year, and Vikings fans decided then and there that they hated the Saints.

So, when Rudolph tweeted the photo animation, he was accentuating the Buccanneers and Vikings fanbase’s hatred for New Orleans.

Rudolph spent the year with the New York Giants in 2021, experiencing little attention in the offense. He didn’t make much of an imprint in the Big Apple, and the Giants tore down their leadership after the 2021 regular season. Rudolph was a casualty of change.

He should make an impact in Tampa Bay, though. Brady’s pal, Rob Gronkowski, retired this offseason, insisting “he won’t be back” this time. And if the Buccaneers rookie tight ends — Cade Otton and Ko Kieft — don’t take off immediately, Rudolph will have a license to shine instantly. Rudolph does the things that Brady craves really well — dependability, redzone prowess, and surehandedness. It makes for a good tandem.

The Vikings and Buccaneers don’t play each other in 2022, but if Rudolph remained with Tampa Bay next year, he’d visit U.S. Bank Stadium as a guest. Minnesota and Tampa Bay play in Minneapolis during the 2023 season.