Kirk Cousins Does It Again 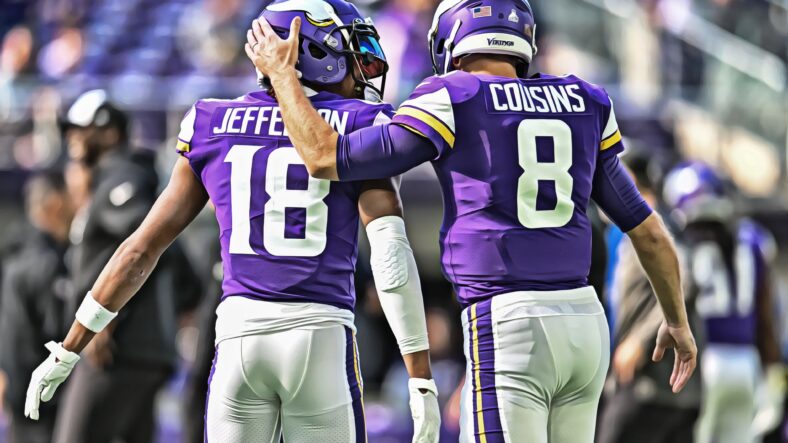 When detractors criticize Minnesota Vikings quarterback Kirk Cousins, the argument is usually something to the effect of “he doesn’t deliver when it matters.”

On Sunday against the Chicago Bears, Cousins delivered his third game-winning drive in as many games, offing Chicago 29-22 in another thriller. Suspense-laden games have become the norm in 2022, but the Vikings are finding victories thanks to Cousins’ late-game theatrics.

If you’re still looking for techniques to chide Cousins, especially this season, it’s time to admit that you just don’t like the man personally. And that’s fine. But, like always, Cousins is responding to false narratives with on-the-field evidence.

Courtesy of a fancy 12-for-15 3rd Down conversion rate on offense, four redzone drives converted to touchdowns, and a bizarre game-winning “grab-way” from Cameron Dantzler, Minnesota remains atop the NFC North and No. 2 in the NFC’s current playoff picture.

Suddenly, the Vikings are in play for a homefield playoff game, which would be the first in five years. The Green Bay Packers lost to the New York Giants in London, so Minnesota even has a security cushion for a couple of week at the division’s zenith.

As always, by this season’s standards, the Vikings were not perfect — not even close to it. The defense was shaky, mainly in the midsection of the game. It squandered a 21-3 lead. Greg Joseph abruptly cannot hit field goals from 50+ yards. Rookie punter Ryan Wright authored his first clunker game. Jalen Reagor tried to give away the game’s momentum with a punt-return fumble. Justin Fields had one of his best games as a pro — of course it occurred against the Vikings. And Minnesota fired up seven penalties after leading the NFL in fewest penalty yards through four games.

Oh, and Justin Jefferson tabulated a cool 12 receptions for 154 yards.

After that Cousins rush and subsequent touchdown, Dantzler grabbed the ball away from former Vikings Ihmir Smith-Marsette — yes, just took the ball away — and the Bears attempt at tying the game was kaput.

The Vikings travel to Miami for a date with the Dolphins next Sunday. Minnesota is an early three-point favorite, as Miami’s quarterback situation is uncertain.