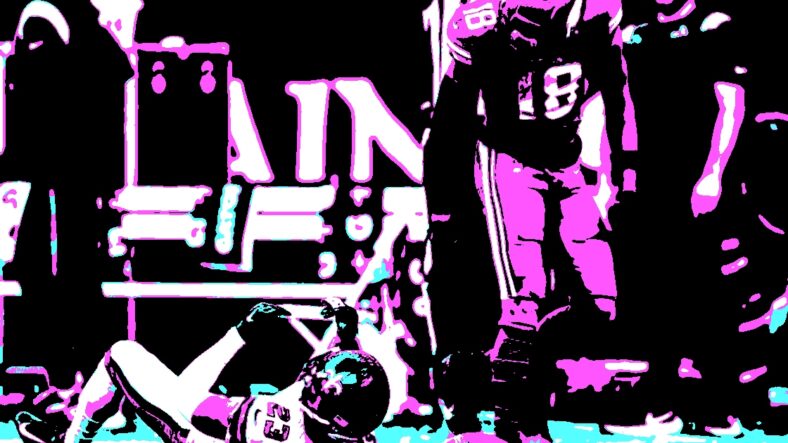 Justin Jefferson played a mammoth role in the Minnesota Vikings win over the New Orleans Saints in London. And on Monday, he offered an exclamation point.

The Vikings wideout likened himself to Allen Iverson and the ex-NBAer’s iconic NBA Finals “stepover” in 2001.

Jefferson posted this to Instagram, taking a bit of a social media shot at Marshon Lattimore, who Jefferson toyed with on Sunday in England.

That alone stated Jefferson’s case of supremacy to Lattimore, but then LSU alumnus added this:

Lattimore is a four-time Pro Bowler and one of the best cornerbacks in football. Until meeting Jefferson in England, he had locked down opposing wideouts with relative ease in 2022. Then, he took on a quiet-for-the-last-two-weeks Jefferson, and something had to give.

Vikings quarterback Kirk Cousins found Jefferson 10 times through the air, tabulating 147 yards and a rushing touchdown for good measure. With the game on the line, Cousins delivered a bomb to the 23-year-old, gaining 39 yards late in the 4th Quarter while setting up kicker Greg Joseph for a game-winning field goal.

And on that play, Jefferson did his interpretation of the Iverson stepover, capping a productive afternoon against one of the top defenders in football. Not long after, the Saints drove down the field with mere seconds remaining, but their kicker, Will Lutz, couldn’t connect from 61 yards to tie the game.

The Vikings climbed to 3-1 for the season, situating the franchise at the NFC’s No. 2 seed and probabilities over 70% to reach the playoffs for the first time since 2019. New Orleans fell to 1-3, needing a winning streak to claw back into the postseason hunt.

Lattimore’s Pro Football Focus grade is down from 77.3 in 2021 to 51.3 this year. Jefferson ranks fifth leaguewide in receiving yards through four weeks.

For posterity, here’s the Iverson moment from 2001: