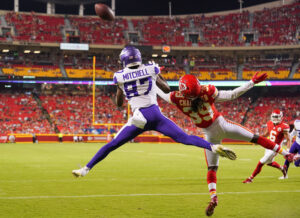 The Vikings open their preseason in Las Vegas when they face the Raiders. While the starters might not play, backups and depth players will get opportunities. The Vikings have some exciting players outside of the stars. The list won’t include big-name players like Justin Jefferson and Danielle Hunter. It will exclusively be players without an NFL start in their careers, late-round draft picks, or undrafted players.

Jackson went undrafted in the 2020 draft. He played his college ball for Syracuse. In 2020, Jackson was part of the Los Angeles Rams. For most observers of the purple team, he had only outside chances to make the roster when training camp started. However, he is turning heads and is regularly making plays in Vikings training camp.

It’s unlikely that Jefferson and Thielen play, so he’ll get his opportunity to shine.

Everything said about Jackson can be said about Myron Mitchell. He is splashing in training camp.

One year after Jackson, in 2021, Mitchell went undrafted and signed with the Vikings, where he spent his rookie season on the practice squad. He appeared in one game against the Bears and played one snap. On the first unofficial depth chart, Mitchell was either WR5 or WR6. He has a real chance to defy the odds and make the active roster. In the preseason game, he has a chance to show his skillset in a real football game.

The edge rusher Zach McCloud is getting paid a guaranteed $250,000 after signing as an undrafted rookie with the Vikings. That’s the second most in this year’s class, only trailing quarterback Carson Strong. That shows how much the Vikings value him. McCloud has higher guaranteed money in his contract than sixth-rounders Jalen Nailor and Vederian Lowe.

He went to the University of Miami for six seasons. In 2021, McCloud recorded 5.5 sacks and 7.5 tackles for loss. Just like the two wideouts, he’s consistently making plays in training camp.

If Danielle Hunter and Za’Darius Smith won’t play, he’ll get a lot of opportunities against the Raiders.

Vilain has a lot of similarities to McCloud. The undrafted rookie is getting paid $227,000 in guaranteed. He also had a long college career, playing for four years in Michigan and transferring to Wake Forest. The Canadian couldn’t get consistent playing time in Michigan; they obviously had some excellent edge rushers like Aidan Hutchinson and David Ojabo.

In 2021, the Wake Forest edge rusher recorded nine tackles for loss and eight sacks. He has long arms and the explosiveness to catch offensive tackles off guard.

Chandler was the Vikings’ fifth-round pick in 2022. The running back spent his first four college seasons in Tennessee before transferring to North Carolina. While he had to split time in Tennessee and never recorded more than 655 rushing yards and four touchdowns in one season, his production exploded in North Carolina, as he managed to gain 1,308 scrimmage yards and scored 14 touchdowns.

His speed is incredible. He ran a 4.38-second 40-yard dash. In addition to that, he’s a good receiver and can even catch passes downfield. It will be exciting to watch if he can turn his speed into production on an NFL field.

He is fast and has an enormous catch radius with his 6’7″ frame. After Irv Smith went down with an injury, he had an opportunity, and he is mostly looking great in training camp, even if he had a few drops mixed in. Now he has another chance to prove his worth in the preseason game.