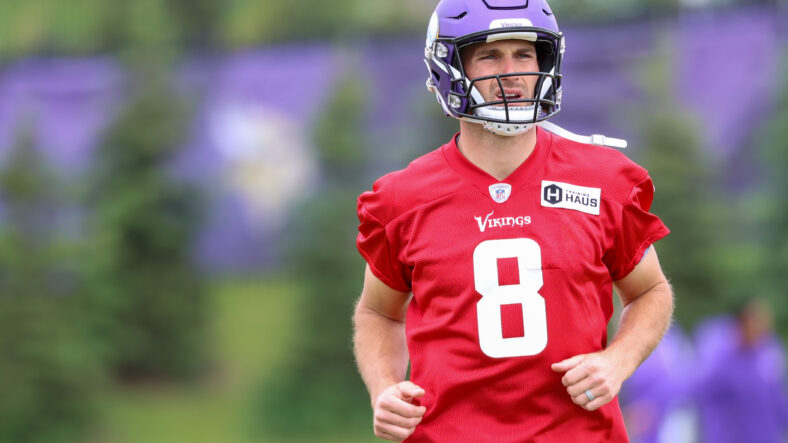 Kirk Cousins is a good but not great quarterback. All people should adopt this thought because it’s true. All statistics and metrics confirm it. However, on certain throws, he’s fantastic. ‘Touchdownwire’ dropped a list with ‘The best quarterbacks for every type of throw,’ written by Doug Farrar.

In the last offseason, the MVP Aaron Rodgers dominated the list. This year, once again, Aaron Rodgers is the best on multiple different passes. Patrick Mahomes, Joe Burrow, Russell Wilson, Josh Allen, Kirk Cousins, and Matthew Stafford are others with appearances, which is not a bad group to be a part of.

The best on zero/one-step-drops was Mahomes, while Stafford wins the category of three-step-drops. Cousins, the Vikings quarterback, meanwhile, takes away the honors of the best players on throws with five-step-drops.

“Say what you want about Cousins (and we certainly have), but he is an above-average quarterback in terms of production. We can’t ignore a guy who finished seventh in DVOA and eighth in DYAR last season. And there was no better quarterback in the league last season when it came to throwing from five-stop drops — that’s where Cousins was at his best, completing 88 of 135 passes for 1,005 yards, 692 air yards, 10 touchdowns, two interceptions, and a passer rating of 105.9. As was the case with Stafford and the three-step drops, there were other quarterbacks with higher five-step passer ratings (Tom Brady and Aaron Rodgers, to be specific), but nobody had Cousins’ touchdown-to-interception ratio.”

Doug Farrar, like what he sees from Cousins on five-step-drops

His excellent touchdown to interception ratio isn’t a surprise. The overall 33 touchdowns and just seven interceptions rank the passer second among NFL quarterbacks with at least six touchdown passes. He only trails the MVP, Aaron Rodgers. Multiple of those seven turnovers came on receiver drops or deflections. ‘Captain Kirk’ drastically improved from his 13 interceptions in 2020.

The quarterback of the Vikings is known as an assassin on play-action passes. In 2021, he was the best in the business.

“Wait. Kirk Cousins makes this list twice? Yup. Cousins has always been an above-average play-action and boot-action quarterback, and in 2021, he completed 104 of 149 passes with play-action for 1,368 yards, 677 air yards, 12 touchdowns, two interceptions, and a league-high passer rating of 119.8. As is the case with Russell Wilson and pre-snap motion, you can certainly wonder why the Vikings didn’t use more play-action last season as a result; Josh Allen led the NFL with 240 play-action attempts. Perhaps new head coach Kevin O’Connell, most recently the Rams’ offensive coordinator, will have something to say about that.”

Doug Farrar, thinks the the Vikings should use more play-action

The Vikings franchise quarterback has always been remarkable on play-action passes. To the surprise of many, offensive coordinator Klint Kubiak called them on just 20% of the passes, which is below average. One of the reasons why he was let go.

Cousins, meanwhile, completed 252 of 364 passes on play-action passes in the last three seasons, which equals 69.2%. 3,628 yards result in 9.97 yards per attempt. 33 touchdowns and eight interceptions result in a passer rating of 122.8. Hopefully, Kevin O’Connell sees the potential in that play type and uses it to his advantage.

O’Connell’s hiring is one of the biggest reasons to be excited about the new season. As a disciple of Sean McVay, he is expected to open up the offense and unleash the best version of his quarterback. Throws after play-action and five-step-drops should be on top of his list of plays to call for the Vikings passer Cousins.