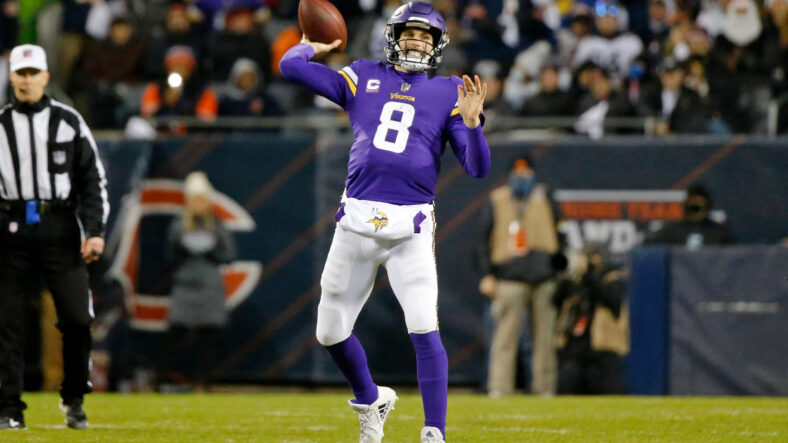 A standard narrative among NFL and Vikings fans is that Kirk Cousins throws a lot of checkdowns, which is the only throw he can make, instead of passing the ball deep. However, the statistics don’t back this theory up.

A good way to see if a quarterback throws deep is to look at the air yards per attempt. Air yards are defined as the difference between the line of scrimmage and the yard line where the ball got to the receiver. It doesn’t matter how far the passer drops back, and the yards after catch are not included either.

Per pro-football-reference.com, Kirk Cousins’ 8.2 air yards per pass attempt ranked him eighth in the 2021 season.

In prior years, Cousins intended air yards per attempt ranked him in the middle of the pack. This is not great but not bad either, as he still had more of those yards than some notable passers. Cousins is improving — something Vikings fans should be excited about.

Air yards are a more analytical way to look at deep throws, while the number of 30-yard competitions is a counting stat. However, it shows if a quarterback consistently takes risks and throws deep or doesn’t do that. For people who watch Cousins play, the following stat, who completed the most passes of at least 30 yards since 2016, shouldn’t be a big surprise.

The other four quarterbacks are viewed as quarterbacks who take risks and throw deep. Why should Cousins be the exception?

This stat is similar to air yards. How far down the field is the targeted player. In this case, we look at players targeted 20 or more yards down the field. The stats can be found in the 2022 version of the PFF quarterback annual.

How high was the percentage of passes thrown to players 20+ yards downfield? Eligible are all passers who attempted at least 30 such throws.

Another list in which Kirk Cousins makes the top ten. He throws deep much more often than people who watch football think. Some notable passers that didn’t make the list are Tom Brady, Joe Burrow, Josh Allen, Patrick Mahomes, and Justin Herbert.

After finding out how often Kirk Cousins throws deep, it’s time to find out if he is actually good at it. Per PFF, how many of the passes where the receiver is at least 20 yards downfield were actually accurate in 2021. Again, only quarterbacks are eligible who attempted at least 30 such throws.

Kirk Cousins not only attempts a lot of passes deep but is also extremely accurate on those throws. A dangerous combination for defenses.

For reference, Aaron Rodgers missed the list with 41%, Joe Burrow recorded 44%, and Russell Wilson, who is known as a great deep ball thrower, finished the season with 40% of on-target throws of 20 or more yards depth of target.

Which quarterbacks have thrown the most touchdown passes to players whose depth of target was at least 20 yards?

The parameters of the passes stay the same. Only passes count, on which the receiver was at least 20 yards down the field.

The league average passer rating on passes with a depth of target of 20+ yards is 92.7. Kirk Cousins is second on this list and tops all ‘elite’ quarterbacks. Two of them, Brady and Rodgers, by about 20 points.

Whenever a receiver leads the league in a specific category, he always needs the quarterback to throw him the ball. That is Kirk Cousins in Jefferson’s case, and he couldn’t break records without the Vikings passer. His excellent skills with the deep ball make the stats possible. They are a great duo and a perfect match, and therefore the credit belongs to both of them and not just to the receiver.

How often Does Kirk Cousins Actually Check Down?

Per PFF, Kirk Cousins checks down on 7% of his passes. The league average is exactly 7% as well. Hilariously, even on his checkdowns, the average depth of target (0.9) is higher than the league average (0.4).

The Vikings quarterback is not a perfect quarterback by any stretch of the imagination and has some flaws. However, he is one of the elite throwers of the deep pass in the NFL. Very few quarterbacks throw deep more often than he does. Therefore, to call him a checkdown merchant, or anything close to that, is just factually incorrect. Cousins continues to be one of the most underrated players in the NFL.