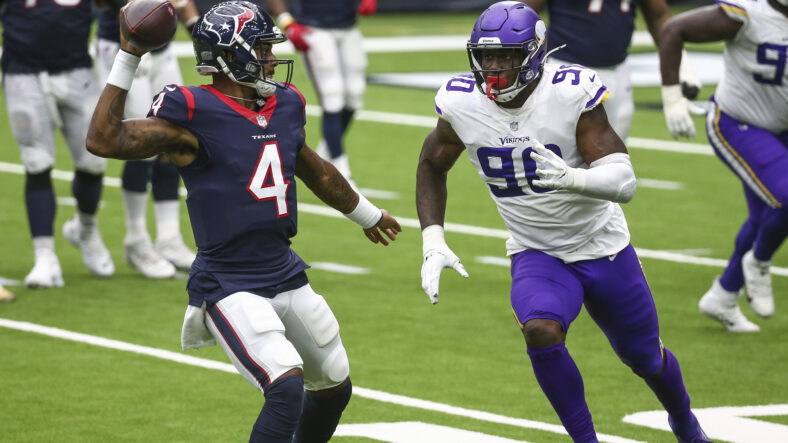 It’s a trend. The Chicago Bears new front office has a thing for former Minnesota Vikings players, adding the ninth to their roster on Tuesday.

This time it’s Jalyn Holmes, a defensive end who played for the Vikings for three seasons.

Holmes joins the Bears practice squad, where he could be the next man up to the active roster if injuries arise.

A member of the Vikings from 2018 to 2020, Holmes has encountered a wild ride after departing Minnesota. In some capacity, he’s been added to the rosters of the New Orleans Saints, New York Giants, and now the Bears since the start of 2021. Last year in New Orleans, Holmes played eight games, started one, and participated in 35% of all defensive snaps.

In Minnesota, Holmes played in 25 games (nine as a starter), compiling 43 combined tackles, five quarterback hits, four tackles for loss, and a sack. His playing time in Minnesota heightened during the 2020 season when Danielle Hunter missed the whole year, and Everson Griffen departed for the Dallas Cowboys and Detroit Lions. Holmes was on the field for two-thirds of Vikings defensive snaps inside the pandemic season.

But in 2021, Minnesota welcomed back the aforementioned Griffen, signed Stephen Weatherly for a few games, drafted Patrick Jones II and Janarius Robinson, and opted to showcase D.J. Wonnum more in his sophomore campaign. Holmes, along with Ifeadi Odenigbo and Jordan Brailford, was the odd man out.

Earlier this week, Vikings bossman Kwesi Adofo-Mensah returned the favor, so to speak, signing a man the Bears drafted in 2021, Khyiris Tonga, a nose tackle.

Holmes’ Pro Football Focus grade in 2021 was 58.8 with New Orleans. The Vikings take on these same Bears this Sunday at U.S. Bank Stadium.