3 Vikings Players to Watch vs. Bears 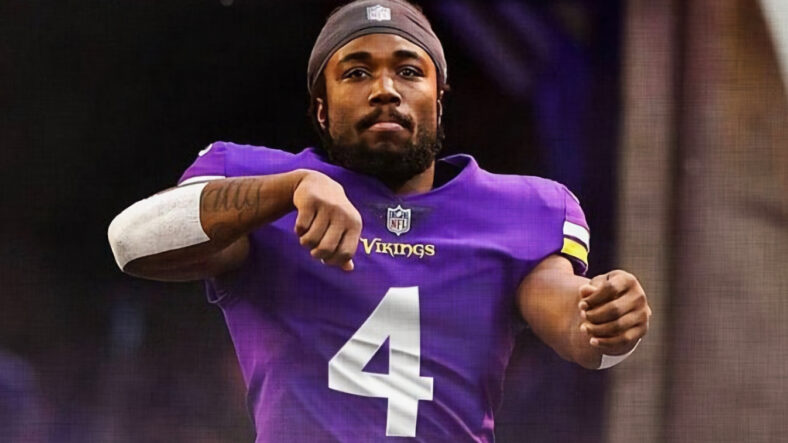 The first of my Week 4 Vikings players to watch against the Saints didn’t disappoint. Justin Jefferson had a spectacular return to form in London with 147 yards from 10 catches. The Saints left their premier cornerback Marshon Lattimore to guard Jefferson for the most part, and it didn’t work.

Despite what seemed like a rough day for the Vikings offensive line Christian Darrisaw was the Vikings best player on Sunday, according to PFF. They gave him an overall grade of 75.3 against New Orleans, while his 78.1 grade for the season is the fifth-best in the league for a left tackle. He is progressing exactly as the Vikings would hope.

Finally, the curious case of Danielle Hunter, whose move from a hand-in-the-dirt defensive end to a stand-up outside linebacker is a work in progress. It has been a baptism by fire for Hunter as he adjusts to his new position. He was going up against some of the best right tackles in the game — Lane Johnson, Penei Sewell, and Ryan Ramczyk. Hunter hasn’t looked as explosive as Vikings fans might expect, but he has still played to a good standard. The more he plays in this system, the better he will get.

Onwards to the Week 5 Vikings players to watch against the Bears.

The run game will be a significant factor in the outcome of Sunday’s game. Run defense is a major weakness of the Bears defense. The 733 rushing yards they have allowed in the opening four games are the most in the league. Dalvin Cook is yet to have a 100-yard rushing game in 2022. He did, however, have over 100 yards from scrimmage in Week 1 and 96 rushing yards in Week 3. despite his game being cut short by a shoulder injury in the third quarter.

Through four games, Cook has totaled 279 rushing yards at an average of 4.4 yards per carry. That sees him with the 13th most yards in the league. The expectation for Cook is higher after being seen as a top 5 back over the last several seasons. Cook is a big game away from being back in the top 10 and pushing toward the top end again. The Bears defense serves up an excellent opportunity to make that happen.

A team’s running game is more than just the running back; equally important is the offensive line. The Vikings linemen must open up some lanes in the Bears defense for Cook to run through. That starts with the man in the center. For the Vikings, that’s Garrett Bradbury. The former first-round pick came into this season under fire, having underwhelmed in his three years in Minnesota. Run blocking has always been Bradbury’s strength.

A pleasant surprise has been Bradbury’s improvement in pass protection, which gives him a more well-rounded game. PFF gives him an overall grade of 61.9, ranking him 18th out of 36 eligible centers in the league. After consistently ranking in the low 20s in previous seasons, 18th shows a marked improvement. Last year’s pass-blocking score of 43.7 was his best season, emphasizing just how poor Bradbury has been. However, with no Akiem Hicks or Khalil Mack to terrorize Bradbury anymore, the Bears defense offers him the opportunity to shine at what he does best.

The key for the Vikings defense is to do something they haven’t done much of so far this season: get to the quarterback. For that reason, Za’Darius Smith can be the man to lead that charge. Justin Fields continues to find life in the NFL complicated. Chicago has managed to win two of their opening four games. They came in a “monsoon” in Week 1 against the 49ers, where only 21 passes were completed by both teams combined. Their second win came against the Texans in Week 3 – probably the worst team in the NFL. They ran the Giants close, but the New York team had two quarterbacks get injured. In the other game against Green Bay, they found themselves handsomely beaten by their old rivals.

Unleashing players to go after Fields, with a heavy dose of blitzing, should be a high priority on the game plan. The Bears passing game and wide receivers shouldn’t be a significant concern for the Vikings defense. Forcing the game into the hands of Fields is what they should want to do. The Bears offense has given up 11 sacks in the last two games and lost starting right guard Cody Whitehair to injury in the Giants game. The Vikings only have seven sacks so far this season. If there was a game to get the pass rush going, it is this one.