Giants Show Vikings Recipe for Success against Bears on Offense 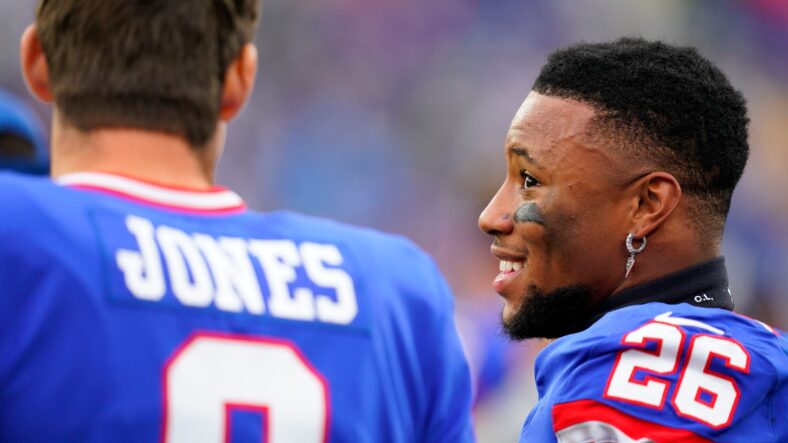 I sat down and watched the New York Giants play the Chicago Bears in their Week 4 game in East Rutherford. With the Bears coming to US Bank Stadium in Week 5, I was immediately drawn to the Giants success in the running game.

Then, as a consequence, great success with the play action pass, particularly bootlegs to the left and right, occurred. Vikings quarterback Kirk Cousins is at his absolute best when the play-action game is set up, and he does those big bootlegs. So what can the Vikings learn from the Giants? A relatively simple gameplan that should play into the Vikings own strengths.

Cousins is a better quarterback than Jones. He also has far superior weapons at his disposal — the Giants receivers are amongst the worst in the league. New York relied heavily on running back Saquon Barkley. Dalvin Cook hasn’t been on the same explosive level as Barkley so far this season. However, with the help of Alexander Mattison and an offensive line that was largely put together with the running game in mind, they should have more than enough to establish the run against the defense that ranks dead last in rushing yards allowed across the whole league.

The Bears are allowing an astonishing 183.3 yards per game across the first four games of this season. The enormous 262 rushing yards they conceded to the Giants didn’t help that average. They did, however, also give up big numbers to the 49ers (176) and the Packers (203). Even when the Giants had their starting quarterback and the backup Tyrod Taylor out injured, they still managed to move the ball into field goal range with direct snaps to Barkley. The successful field goal attempt proved decisive in the game’s outcome.

For the Vikings, it’s about more than just running the ball. They have the playmakers in the passing game to finish the Bears off — something the Giants failed to do until a fumble recovery on a kickoff return at the end of the game. The Giants successful bootlegs resulted in some simple passes and a couple of walk-in touchdowns by the quarterback. Cousins running a touchdown in isn’t impossible. He’s certainly no less graceful across the ground than the Giants QB. I’d be surprised if the Vikings go that route at any point in Sunday’s game.

With Cousins at the helm, the Vikings can make those explosive plays that result in long touchdowns or big chunk plays. We haven’t seen enough of that so far this season, as the offense settles into a new system. With the Bears unable to handle the Giants offense, there’s a big case for the Vikings offense going back to what it’s done best with Cousins under center — at least to start the game.

Chicago was able to make adjustments to slow down the play-action passes — Jones and Taylor both getting injured also helped — though they never really stopped the run. The Vikings don’t need to rely on those two things solely.

Coach O’Connell will want to test the Bears cornerbacks in every way possible. Jaylon Johnson is the Bears best cornerback, and he’s missed the last two games with a quadriceps injury. Rookie Kyler Gordan has struggled to adapt to life in the NFL, and the rest of the cornerbacks just aren’t particularly good. Justin Jefferson was back to his brilliant best in London and will be a terrifying prospect for the Bears cornerbacks.

The Giants set a template for the Vikings to follow, with the caveat that the Vikings have the personnel to expand on it. After starting the season 3-1, the Vikings have a great chance to move to 4-1 before heading to Miami, where they will face the Dolphins before heading into their bye week. At home against an average Bears team, the Vikings should win. The big question is can they have a dominant performance that demonstrates they are serious playoff contenders?

After the Week 1 win against the Packers, the Vikings have managed to win games without being completely convincing. This is a game where they need to make a statement by putting together a consistent four quarters of football. It would also see them have a 3-0 record in the division after playing each divisional rival once. That would be a significant advantage for the rest of the season.