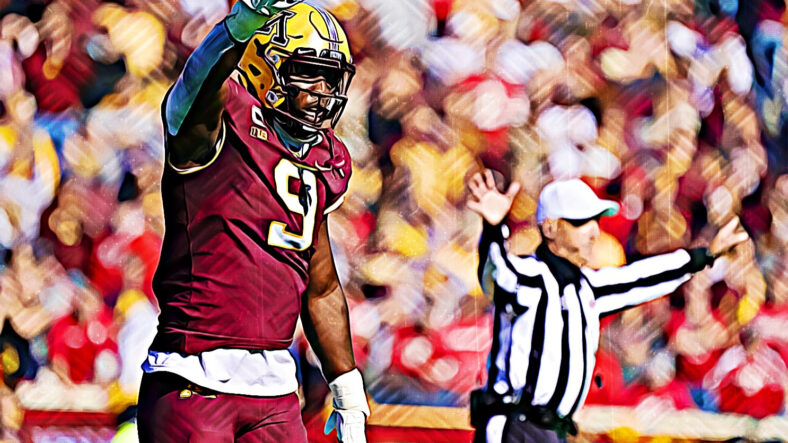 Because Marcus Sherels, who was not drafted by the team, played for the Minnesota Vikings for so long, there’s a temptation to believe “the Vikings always draft” Minnesota Golden Gophers in April.

Sherels was an undrafted free agent in 2010, and coincidentally, the 2010 NFL Draft was the last time before this year’s draft that the Vikings drafted a man from the University of Minnesota.

That was Nate Triplett, a linebacker who ended up not playing regular season games for the Vikings but instead spending a little bit of time with the Indianapolis Colts.

The Draft Network called Otomewo “an intriguing developmental defensive lineman that offers prototypical size, length, and power to serve as a hand-in-the-dirt base end at the NFL level.”

And now Otomewo will get a chance to effectuate that NFL level fate in the same state he attended college. Otomewo has Nigerian roots — like former Gopher teammate Boye Mafe, who landed with the Seattle Seahawks over the weekend — and played high school football in Indiana.

At the University of Minnesota, Otomewo played in 34 games, registering 81 total tackles and 7.5 sacks. He’s a humongous human, standing 6’6″ and weighing 282 pounds. He majored in Business & Marketing Education. Departing high school, Otomewo was classified by some draft scouts as the best EDGE rusher in the state of Indiana.

The Vikings employ these men at EDGE roster spots on the depth chart, so Otomewo experiencing playing time early on is slim:

When Otomewo is ready for the bright lights, he could also play upfront in the Vikings 3-4 defense, in a spot, for example, currently inhabited by Harrison Phillips, a free agent from the Buffalo Bills.

Otomewo is the ninth Gophers defender drafted in the last five years: