The Most Underrated WR in the Draft 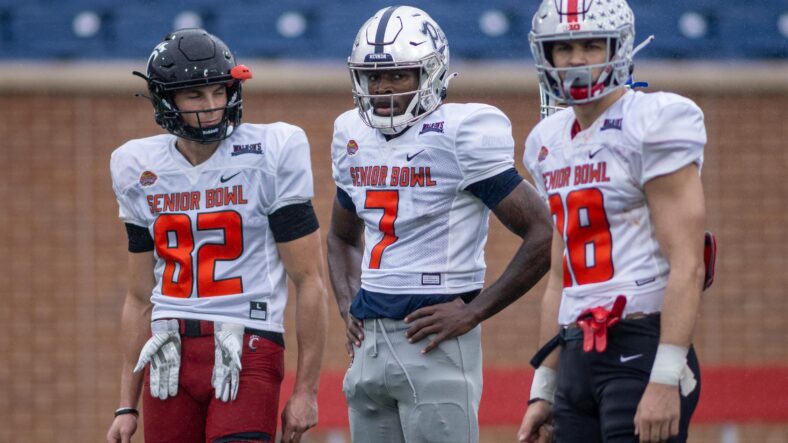 A wide receiver is not the most important hole to fill in the draft. The Vikings have an absolute superstar in Justin Jefferson. He gained over 3000 yards in his first two seasons in the NFL.

Adam Thielen was a dependable player in the past. That’s no longer the case. The last time Thielen played in every game of a season was in 2018. In the same year, Thielen had his last 1000-yard campaign. That was a long time ago. He will be 32 years old when the Vikings play their first game of the 2022 season.

KJ Osborn had the most productive season of any third wide receiver of the Vikings in years. Yet, per PFF, he was the 76th best of 155 wideouts in the NFL.

The Vikings could need another explosive playmaker, especially since Kevin O’Connell is expected to run more plays with three or four wide receivers on the roster.

There are excellent receivers available in the first round when the Vikings pick at the 12th spot. Most experts look at guys like Jameson Williams and Garrett Wilson. However, there is a sleeper going to get selected at some point on day two of the draft, which the Vikings should take a look at.

Pierce grew up in Illinois, where he attended Glenbard West High School. In addition to football, he played volleyball and basketball and ran track. The athlete was a two-way football player. In his senior year, he caught 25 passes for 372 yards and five touchdowns. On defense, Pierce had three sacks and four interceptions. Consequently, the Illinois native was named MVP of his league. The three-star recruit accepted the offer of Cincinnati over others like Central Michigan and Bowling Green.

In his freshman season, Pierce didn’t play on offense. He appeared mostly on special teams. Interestingly, he took some practice reps at linebacker but never played on defense.

As a sophomore, the receiver finally had the opportunity to play at his position. He caught 37 passes for 657 yards and two touchdowns. In his junior year, he missed four games with a knee injury in the shortened COVID season.

Pierce played in six games and recorded 17 catches for 315 yards and three touchdowns. In his senior season, the prospect played in all 14 games and finished the season with 52 catches, 884 yards, and eight touchdowns.

His production does not match his skills and his play on film. The question of why he didn’t even get four catches per game in his final three seasons is something only his coaching staff can answer.

Alec Pierce is a special athlete. He proved it with an impressive performance at the combine. 6’3″ and 211 pounds combined with a 4.41 40-yard dash can’t be taught. Those are the measurables of a nightmare for defensive backs. His vertical jump of 40.5 inches and his broad jump of 10’9″ prove that his 40-yard dash was not a fluke. He’s an explosive athlete, and it is easy to see on tape. He uses his power and speed to create separation.

His hands are above average as he had just four drops in 2021, despite most of his targets coming on deep passes. He’s a true deep threat. His average depth of target was 17.1 yards, which ranks him among the top deep threats in the nation. Cornerbacks looked scared to play him at times because he could just run by them.

The way his body is built helps him in some areas but hurts him in others. His agility is below average. The 20-yard shuttle and 3-cone drill numbers prove what evaluators see on film. As a result, he struggles to get much yardage after the catch. In his last season, he gained 3.7 yards after the catch and forced just four missed tackles.

Pierce is not very versatile. He is very good at vertical plays, but his agility is a problem on short plays. He may be better at that than he showed in college because the team just didn’t use him that way. The route running needs some refinement, but he has the skillset to become a more complete receiver.

Another concern is the level of competition he went up against. Cincinnati plays in the AAC, and therefore he didn’t play against a lot of high-level opponents. When Cincinnati played Alabama in the CFB playoffs, he had just two catches for 17 yards.

The reason for that is self-evident. Alabama entirely focused on him. They tried not to let him run past them on deep routes, yet he still did a few times. His quarterback Ridder should’ve still pulled the trigger at times since the offense couldn’t get anything going.

Draft pundits view Pierce as a day two draft pick. That’s excellent value for a, in my opinion, first-round talent. If he’s used the right way, he will strike fear into defensive coordinators and cornerbacks. In the Vikings’ offense, he could be used as a deep threat on vertical routes to open up the field for Justin Jefferson and the running game.

He’s the kind of receiver where the cornerback needs safety help if he doesn’t want to get beaten deep. Double-teaming Jefferson, Pierce, and Thielen while still defending the run is impossible. Defenses only have eleven players to move around. The offense could become incredibly versatile and great in all areas with him. He’s a player Kwesi Adofo-Mensah should consider when the Vikings are on the clock with the 46th overall pick in the second round.