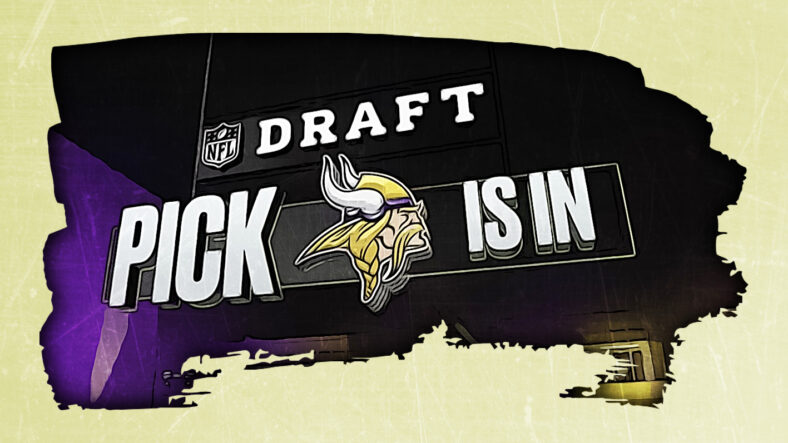 The two most commonly associated names with the Minnesota Vikings in the 2022 NFL Draft early in the process were Ahmad Gardner from Cincinnati and Derek Stingley Jr. with LSU. But after tremendous NFL Combine and Pro Day showings, those men may not be on the board for Minnesota with the 12th overall pick.

So, new general manager Kwesi Adofo-Mensah may need dance partners if he wishes to trade down on draft night. Recently, enthusiasm for the idea of trading down has grown in the Vikings digital community — at least in predicting what might happen.

These are the dance partners, ranked in no particular order of likelihood.

Last April, Los Angeles snagged Rashawn Slater in the draft — a man many believed was on the Vikings 2021 draft radar. Slater was fantastic during his NFL maiden voyage.

Now, the Chargers must “do it again” to shore up the other side of the trenches, needing to protect Justin Herbert for the long term. Tom Telesco could be interested in Trevor Penning, a promising tackle from Northern Iowa.

Regrettably, Telesco doesn’t own a 2nd-Round pick this, so he and Kwesi Adofo-Mensah would have to get creative for a deal to work.

Mitchell Trubisky was signed during 2022 free agency. But nobody knows if he’s the “solution,” truly mismanaged by the Chicago Bears for four years — or if he’s a soon-to-be patchover quarterback.

With the Vikings 12th pick, Mike Tomlin and friends could steal Malik Willis or Kenny Pickett off the board. Of course, the Carolina Panthers and Atlanta Falcons — two QB-needy teams — could spoil the fun. Yet, if they do not, Minnesota is a prime candidate to trade back for additional draft capital with Pittsburgh.

Almost a copy-paste here for the Saints, but New Orleans enlists Jameis Winston at QB1. Winston was decent before injury in 2021, but he was merely efficient — not dynamic.

Drafting a Willis or Pickett would grant the Saints visions of grandeur at QB1 to, indeed, be dynamic.

Like the Steelers, the Vikings could demand a 1st-Rounder, 2nd-Rounder, and more from the Saints.

Teams do funky things to land quarterbacks of the future.

This is where the fun begins.

Would you, the Vikings enthusiast, like two 1st-Round picks for the price of one? Introduce yourself to Brett Veach, the boss of the Chiefs.

In theory, Veach could send the 29th and 30th picks to Minnesota for the 12th pick while landing “the next Tyreek Hill.” Think: Jameson Williams, Garrett Wilson, or Drake London.

Note: On this idea, the Vikings might have to toss in a lower-round deal sweetener.