There Is Now Evidence of a Possible Vikings Draft Trade 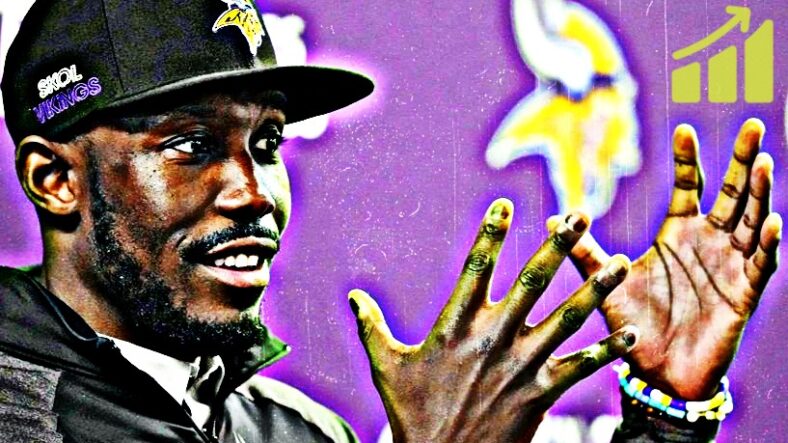 In the 2021 NFL Draft, the Minnesota Vikings traded the 14th overall pick to the New York Jets, who drafted offensive lineman Alijah Vera-Tucker with the pick. The Vikings slid back nine spots, choosing left tackle Christian Darrisaw — and stockpiling 3rd Rounders, which were used the next day to draft quarterback Kellen Mond and offensive lineman Wyatt Davis.

The verdict is undetermined on Mond and Davis, so the efficacy of the trade, for now, is interpretive.

That trade was orchestrated by ex-general manager Rick Spielman, a man terminated three months ago, along with his head coach, Mike Zimmer. Now, though, the Vikings employ another general manager, Kwesi Adofo-Mensah, and another 1st-Round trade could be on the horizon.

Minnesota holds the 12th pick in April’s draft, hypothesized to use the selection on a cornerback like Ahmad Gardner or Derek Stingley Jr. or an EDGE rusher like Jermaine Johnson. We shall see.

But there is also a little bit of credible evidence to suggest the Vikings could again trade their selection, accumulating more draft picks inside April’s event. In an article from Pro Football Network on Monday, Tony Pauline dropped the Vikings smack dab in the middle of trade rumors:

“Don’t discount a needy tackle team such as the Los Angeles Chargers moving up for Penning. One trading partner to keep in mind is the Minnesota Vikings. I’ll have more on that later this week.”

Pre-draft, the Chargers employ a left tackle named Rashawn Slater — who was coveted by many Vikings fans during last year’s draft build-up — and a Vikings castoff, Storm Norton, at right tackle.

Norton tallied a 44.7 Pro Football Focus pass-blocking grade in 2021, so it checks out for Los Angeles’ possible desire to find a better RT in the draft.

And because Adofo-Mensah has preached value, value, and more value since his arrival in the Twin Cities, there’s a reasonable chance the Vikings do, in fact, trade back on April 28th. With the Chargers, the Vikings could likely land Los Angeles’ 17th pick in the 1st Round and the franchise’s 3rd-Round choice (and maybe more) — in exchange for Minnesota’s 12th overall pick and probably a 5th-Rounder or so. That swap validates via most reputable draft-trade calculators.

Then, the Chargers could snag a right tackle such as the aforementioned Trevor Penning or Charles Cross. In return, Minnesota could still strike at #17 for a cornerback like Trent McDuffie or Andrew Booth Jr. while stuffing the Chargers 3rd-Rounder and possibly more in a back pocket to draft another high-round prospect.

This is one of several trade possibilities for the Vikings, as teams like the Kansas City Chiefs, New Orleans Saints, or Pittsburgh Steelers may yearn for Minnesota’s 12th pick.

The moral of the story: start warming to the idea of a trade-back because Adofo-Mensah will receive those phone calls. Based on the way Adofo-Mensah perceives team-building through a pronounced lens of value, adding more “cheap” rookies might be the smartest way to fill out Minnesota’s 2022 depth chart.