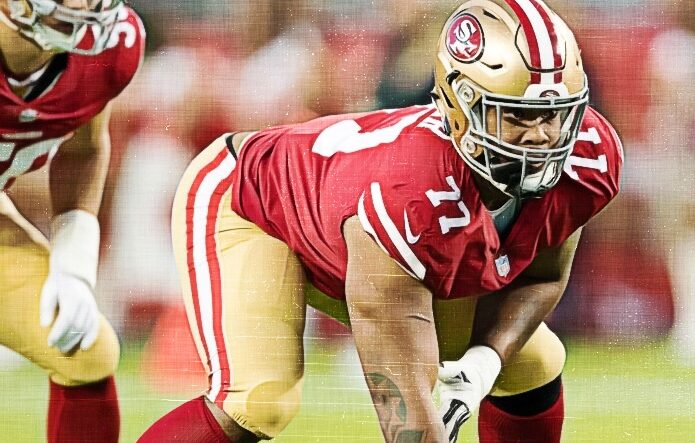 Taylor was a 7th-Rounder that afternoon, a hybrid-type defensive end and defensive tackle, who last played in the NFL during the 2019 season — the year San Francisco reached the Super Bowl.

Now, Taylor is a member of the Minnesota Vikings, presumably signed by general Kwesi Adofo-Mensah from his 49ers ties.

Adofo-Mensha spent seven years with the 49ers, and Taylor was around for the final three.

This is a low-risk move for the Vikings, a team that signed Harrison Phillips from the Buffalo Bills and Za’Darius Smith from the Green Bay Packers this offseason. Taylor won’t start — unless something wild happens — but will evidently get a crack at a roster spot during training camp and preseason this summer.

Taylor tore his ACL on December 28, 2019, and never played again for the 49ers. Last year, he signed with the Tennesse Titans but was waived three months later, before training camp began.

His college coach at Temple, Geoff Collins, loved him, stating three years ago, “I knew he was an elite talent – an NFL talent – because I’d been around some of the best defensive linemen who had made it to the NFL while I was coaching in the SEC.”

For defensive linemen, the Vikings currently employ this group:

That list will trim to 10 or 11 men by Week 1 of the regular season. Plus, the NFL Draft occurs in three weeks. So, for Taylor to make the 53-man roster this fall will require a mini-miracle, which is usually the sentiment for reclamation projects.

Taylor was teammates with Vikings cornerback Nate Hairston at Temple, along with Haason Reddick, an EDGE rusher for the Philadelphia Eagles.

Taylor has played 203 defensive snaps in the NFL.