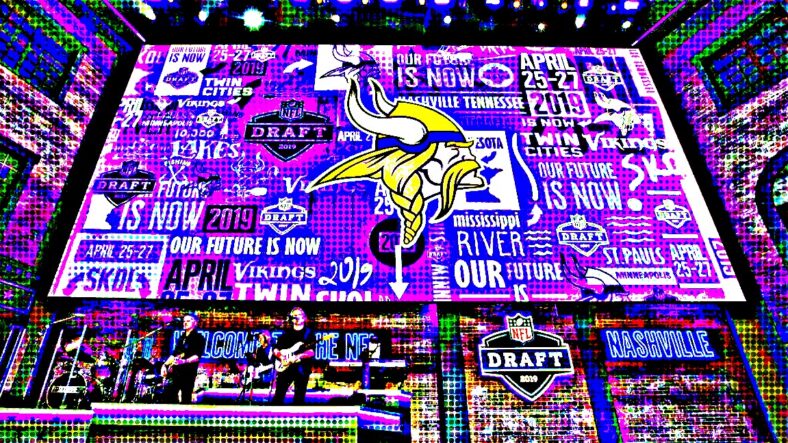 The Minnesota Vikings have four picks in the first five rounds of the 2022 NFL Draft, sacrificing one 4th-Rounder in 2021 for the ill-fated Chris Herndon trade.

While one more mock draft will be authored before draft day, consider this a Vikings Five-Round Mock Draft 1.0. Of course, new general manager Kwesi Adofo-Mensah is likely to move-and-shake via trade, but that is impossible to predict. So, no trading was conducted for this mock draft.

Indeed, it’s a longshot for Stingley Jr. to be available at the 12th spot. We get it. Yet, most of the teams choosing ahead of the Vikings have vivid needs at quarterback and wide receiver.

So, the prediction here is that QBs and WRs flood the Top 11 picks, leaving “other” position players like Stingley Jr. on the board.

Let’s have some faith that he falls to Minnesota.

Patience is a virtue, and it will be needed as Ojabo tore his Achilles last month.

But Minnesota doesn’t need a pass rusher in 2022. Selecting Ojabo — at this reduced draft-stock price — saves him for a rainy day, one when the team may not necessarily have titans of industry like Danielle Hunter and Za’Darius Smith on the roster.

Plus, holstering Hunter and Smith is really just a fearsome twosome. A contending team — as the Vikings aspire to be — needs multiple pass rushers. Because, guess what — Hunter and Smith have very recent injury history, and one or both will probably miss some games in 2022.

Having Ojabo on the roster reduces the top-heaviness of Hunter and Smith as the Vikings only feared sack merchants.

Quietly, the Vikings have a long-term need for linebackers. Right now, it’s Eric Kendricks and Jordan Hicks — and that’s about it. Anthony Barr is unlikely to return. Troy Dye, Chazz Surratt, and Blake Lynch are humongous development question marks.

Minnesota is “set” sans injury for 2022 linebackers, but, like all other picks, another Smith to the Vikings prepares for the future.

And, this is a tongue-in-cheek way to continue the Vikings Smith party, with these dudes currently under contract:

Weatherford was the best safety and draft value on the board for this 5th-Round pick. If the Vikings sign no free-agent safeties, they’ll need some for 2022 defensive depth. Weatherford offers that.

Weatherford is a tremendously big-hitter, and he can learn for a few years next to another hit-heavy guy, Harrison Smith.