Vikings Seem Committed to a Garrett Bradbury “Prove It” Year

If you went back in time to January and told Vikings fans that Minnesota wouldn’t draft a single center, most of them wouldn’t believe you. The rest of them have just learned to expect the worst and probably would believe that Kwesi Adofo-Mensah would trade for every single seventh-round pick.

Aside from the obvious needs in the secondary of their defense, it seemed that one of the focuses for this new regime would be fixing up the interior of that offensive line. To this point, it seems that Adofo-Mensah and Kevin O’Connell are mostly fine with how much of the o-line looks ahead of the 2022 season.

Especially at center, the Vikings have done very little to suggest that they are interested in replacing Garrett Bradbury this year. The 26-year-old is set to hit free agency next offseason after the team declined his fifth-year option of $13.2 million for 2023. However, 2022 seems like one last chance to prove he can be a starting center in the NFL.

Minnesota used their first two picks to strengthen their secondary, so it seemed clear that their next order of business would have to be either center or guard. They opted for guard by selecting Ed Ingram out of LSU.

It has to be considered that Ingram has taken snaps at center, including some impressive ones at the Senior Bowl. He was also one of the very best guards in terms of pass-blocking in the SEC. It would not be surprising at all for O’Connell to see what Ingram can do in the middle of the Vikings o-line, especially during training camp. However, I still think he is most valuable at his natural right guard position. Minnesota still needs a more reliable solution than Oli Udoh at that spot as well.

The Vikings are bringing in UDFA Josh Sokol out of Sacred Heart too, but unless he becomes one of the bigger camp surprises (don’t count it out), he is likely just a body for training camp and a potential practice squad guy. Outside of that, the only other player listed as a center on Minnesota’s roster is Austin Schlottmann, who they signed in March.

All signs point to Minnesota allowing Garrett Bradbury to at least play out his contract and move from there. Perhaps an improvement at right guard will help, and they will be able to bring back Bradbury on a cheap deal in 2023. Or maybe he bursts onto the scene and finally has the breakout season that we’ve been waiting for from the former first-round pick. Here’s to hoping. 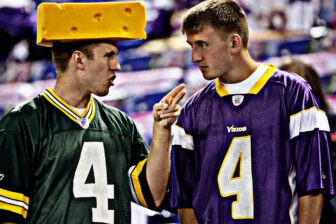 Also Read:
These Are the Players to Watch for Vikings Trade Aftermath with DET, GB
Share:
Loading Comments...