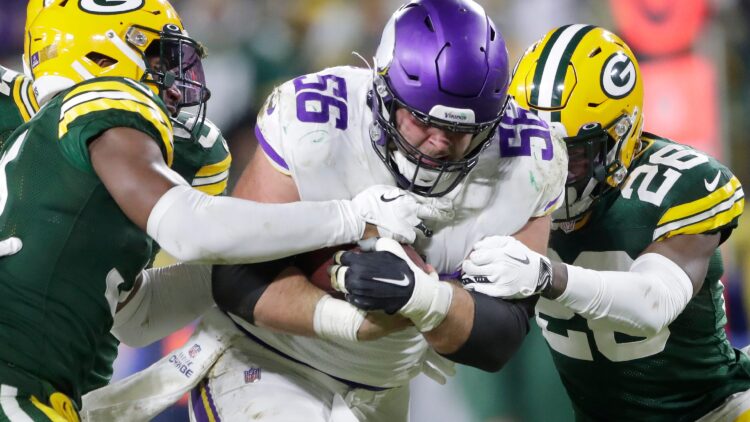 I mean, it’s a no-brainer but let’s talk about it anyway — Garrett Bradbury’s fifth-year option.

There’s more chance of me coming over to the United States from England and becoming the next quarterback of the Minnesota Vikings than the team exercising that option. The ship has certainly sailed for this out-of-shape 36-year-old Brit.

It surely has for Bradbury as well.

The deadline for teams to pick up the fifth-year option on their 2019 first-round draft picks is May 2.

I think there is a chance for improvement under new head coach Kevin O’Connell and his coaching staff. He suits the scheme O’Connell runs and fits the bill for most of what the new Vikings head coach will want from a center.

It would be an extraordinary leap of faith to give Bradbury the $13,202,000 that comes with his fifth-year option. It’s not going to happen. $13.2 million is top money for a center. Only Jason Kelce ($14 million APY) and Frank Ragnow ($13.5 million APY) earn more than that at the position. Bradbury is nowhere near that caliber.

Pro Football Focus recently looked at all the first-round rookies from 2019 and predicted the outcomes of their fifth-year options. Unsurprisingly, they predicted the Vikings would decline on Bradbury. This is what they had to say:

“Bradbury was briefly benched during the 2021 season following a streak of particularly bad play, but he worked his way back into the starting lineup to close out the year. In three seasons as a full-time starter, Bradbury has yet to eclipse a 45.0 pass-blocking grade.  While he projects as a fit in new head coach Kevin O’Connell’s offense, it’s hard to envision the new regime fully guaranteeing over $13 million to a struggling center.“

Technically, Bradbury only lost his place on the team because he had a positive Covid-19 test, which meant he had to stay at home for 10 days. When he did return, he was the backup for one more game before the deputizing Mason Cole moved to right guard in place of the also-struggling Oli Udoh. Bradbury took back his place at center for the remainder of the season.

The problem is glaringly obvious, as illustrated by the PFF blocking grade.

Bradbury does everything else well. His run blocking, snapping of the ball, and calling of protections are all good. I predicted earlier in March that Garrett Bradbury would be the starting center again this season. Barring a big free agency move to sign JC Tretter, that looks likely. He has the athletic nature suited to the wide zone scheme Kevin O’Connell will be running. However, his pass blocking simply has to improve.

Maybe new offensive line coach Chris Kuper can unlock something in Bradbury that causes him to take a significant leap this season. He will be playing for his future, whether that’s with the Vikings on a more reasonable contract (something I wouldn’t rule out at this juncture). Or he’ll be finding his way onto a different roster in 2023.

It is undoubtedly the last chance saloon for Bradbury, and the Vikings should at least have one eye on his replacement. If not two.

The aforementioned JC Tretter would be a significant upgrade at the position. With the cap constraints, that could be difficult to pull off. The draft might be a better place to look. Tyler Linderbaum in the first round seems unlikely, but there are some other options. Notably, Nebraska’s Cam Jurgens has been flying up draft boards since an impressive combine. Dylan Parham, Alec Lindstrom, Dohnovan West, and Luke Fortner are the other centers in this year’s draft that might interest the Vikings.

If it is Garrett Bradbury again this season, a rookie waiting and learning behind him is the sensible option, in my opinion.