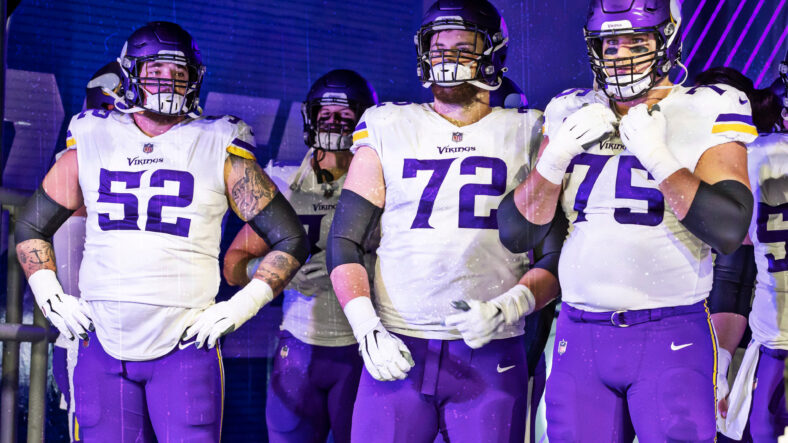 The Minnesota Vikings brandished two iron men on offense in 2021, and both are slated to start again in 2022.

Of all Vikings starters on offense, right tackle Brian O’Neill and left guard Ezra Cleveland were the only two players to take every snap last season. They took 1,141 offensive snaps in a season for the Vikings that ended with an 8-9 record.

Here’s the leaderboard for 2021 snaps among Vikings offensive players:

All other unlisted Vikings on offense took less than 50% of snaps in 2021.

O’Neill and Cleveland are scheduled to start again this September, while the rest of the Vikings offensive line may look different. Garrett Bradbury seemed to be announced as the starting center in the spring, but when the June minicamp hit, the vibe from Vikings headquarters suggested competition may take place at training camp. After that, at right guard, Minnesota will host a bonafide battle consisting of Jesse Davis, Chris Reed, and rookie Ed Ingram as contenders. Davis and Reed are free-agent signees by new general manager Kwesi Adofo-Mensah, and Ingram was selected from Round 2 of the draft in April.

The continuity provided by O’Neill and Cleveland was impressive, but the end result for Minnesota’s OL pass protection was poor. For the fourth consecutive season, the Vikings ranked near the bottom of the business in pass protection efficiency:

Last September, O’Neill re-upped with the Vikings on a mammoth deal, netting the lineman $92.5 million through the end of 2026. Per average annual salary, O’Neill is the NFL’s second-highest-paid tackle ($18.5 million) behind Ryan Ramczyk of the New Orleans Saints. Unless O’Neill is beset by Matt Kalil-like voodoo, Minnesota is set at RT for five more seasons.

Cleveland authored a commendable sophomore season in 2021. He scored a 68.6 grade from Pro Football Focus in his second season, an uptick of 2.4 points from his rookie campaign. Barring something funky later this summer, Cleveland will resume his starting LG role in 2022.

The defensive iron men for the Vikings last year? There was only one — Xavier Woods. He played safety for the Vikings in 2021 but departed in free agency for the Carolina Panthers in March.

The team’s iron men in the 2020 season were Anthony Harris (S) and Dakota Dozier (G).