Ndamukong Suh to Vikings Chatter Isn’t Over Yet 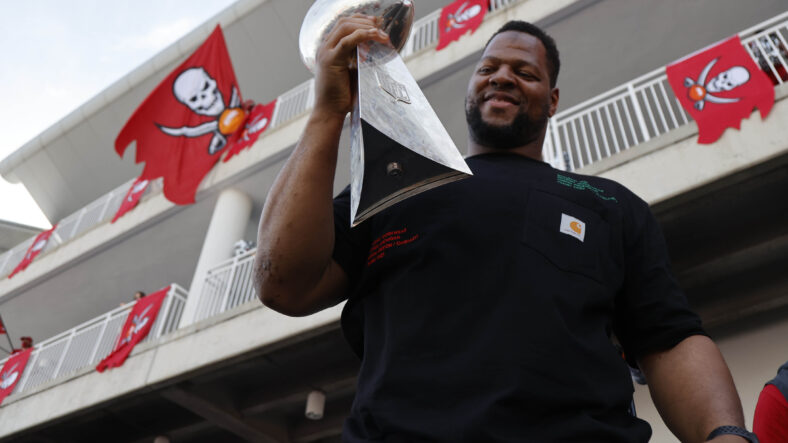 Since entering the league in 2010, Suh has played for the Detroit Lions, Miami Dolphins, Los Angeles Rams, and Tampa Bay Buccaneers. He won a Super Bowl in 2020 with the Buccaneers.

On Tuesday, though, the Suh-Minnesota chatter resurfaced with a tweet from NFL analyst Dov Kleiman.

The source mentioned, Brad Stainbrook, is a Cleveland Browns reporter who was clarifying the Browns lack of interest in the veteran defender.

It is unclear if the Vikings and Raiders have continued talks with Suh — or if the Kleiman-Stainbrook tweets are rehashings of Dragon’s news three weeks ago.

Regardless, Suh speculation for the Vikings isn’t dead. In theory, if general manager Kwesi Adofo-Mensah isn’t sold on Armon Watts’ starting prognosis for 2022, he has the funds to sign Suh for a one-year deal.

Minnesota has about $11 million in cap space as of July 11th, and that would do the trick to onboard Suh for the 2022 campaign — with money left over. Although, Adofo-Mensah will need a couple million 2022 cap dollars for rookies Andrew Booth and Ed Ingram when they actually sign their contracts.

Suh has quietly been the NFL’s iron man, never missing a single game to injury. He was suspended for a couple of games in 2011, but Suh has played in every game otherwise. Tampa Bay signed notable Viking killer Akiem Hicks from the Chicago Bears in June, signaling the end of the Suh era with the Buccaneers.

A five-time Pro Bowler and three-time First-Team All-Pro, Suh is likely headed for Hall of Fame induction when he calls it quits, although his reputation at times in his career isn’t spotless. Due to some on-the-field antics, Suh was labeled “dirty” as a younger man. He tallied a 49.4 score from Pro Football Focus in 2021, by far the worst of his illustrious career. It is unclear if the unflattering grade signals an age-related decline or simply a “down year” during his final stint with the Buccaneers.

Suh has recorded 70.5 sacks in his career with the Lions, Dolphins, Rams, and Buccaneers.

If Suh indeed signs with the Vikings, Ed Donatell would employ one of the most noteworthy defensive lines in the league, at least per name recognition: