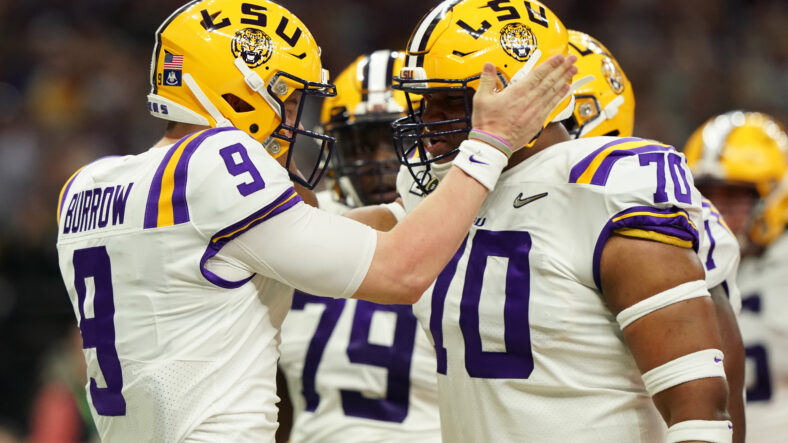 The Minnesota Vikings have lofty plans for 2nd-Round guard Ed Ingram as the franchise has not nailed down the RG position of the offensive line since the end of the 2017 season. But there’s a temporary hiccup.

It is unclear why Ingram remains unsigned.

The Vikings spent 2nd-Round draft capital on Ingram, a standout offensive lineman from LSU. Even with a checkered past, Minnesota did diligence on Ingram and insisted his character was worthy of the Vikings fresh-start culture.

Ingram was drafted to help find a fix-all for this persistent pass-blocking malady, troubling the Vikings for nearly a decade:

The edges of Minnesota’s offensive line are sufficient, employing Brian O’Neill at right tackle and the second-year Christian Darrisaw, who was drafted in the 1st Round of the 2021 NFL Draft. But the guts of the line are a different story. Center Garrett Bradbury, also a 1st-Rounder, and various men at RG have struggled tremendously to solve Minnesota’s pass-protection woes.

The contractual standstill with Ingram and the Vikings shouldn’t be considered a source of anxiety for fans, but a 2nd-Rounder not signed this late in the spring is indeed bizarre. One can take solace in knowing Ingram is there at Vikings headquarters for OTAs, though.

If, for some reason, Ingram’s contractual misgivings did emulate McKinnie’s from 2002, the Vikings have a couple of contingency plans. New general manager Kwesi Adofo-Mensah signed offensive linemen Chris Reed and Jesse Davis this offseason, presumably to compete for the flimsy RG position and add depth to the OL portion of the roster. In recent years, Minnesota typically signs a reservist player like Dakota Dozier for right guard and “calls it good.”

Neither Reed nor Davis have the upside possessed by Ingram, so the Vikings are best served to get Ingram’s signature sometime soon.

Ingram was teammates with Justin Jefferson, Joe Burrow, and Ja’Marr Chase at LSU.

Vikings mandatory minicamp begins next week. Ingram is expected to be in attendance.