The Case for Odell Beckham Jr. in Purple 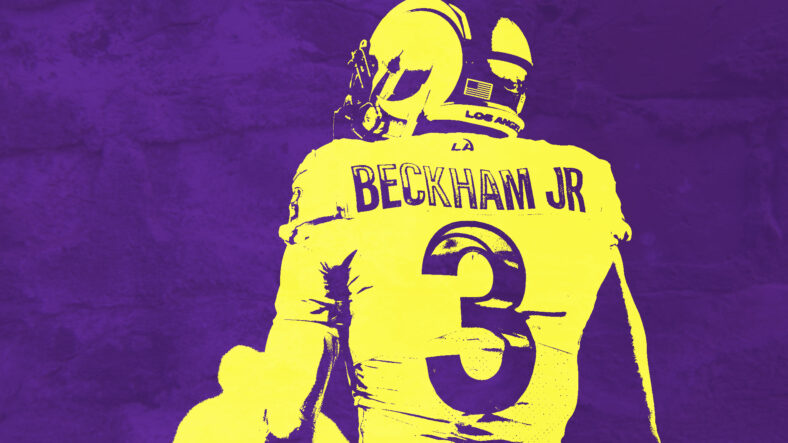 If one rewound the clock to 2021 and discussed the Minnesota Vikings potential onboarding of Odell Beckham from free agency, the conversation would be quasi-baseless.

From 2014 to 2021, the Vikings fancied the enterprise as a defensive organization, stuffed to the gills with an emphasis on murderous defense designed to suffocate opponents. That mentality was true for the first six years of former head coach Mike Zimmer’s tenure, but the defense tapered off in 2020 and 2021.

And during the Zimmer era, there was no pronounced priority of getting richer on offense. Indeed, the team employed Dalvin Cook, Justin Jefferson, and Adam Thielen — but that was “good enough” for a defense-first squad.

Now, though, an offensive brain, Kevin O’Connell, is in charge, and Minnesota could reasonably use free agency to increase affluence on offense.

The aforementioned Beckham is a free agent, and here is why the 29-year-old could land with the Vikings. And, also note Beckham is recovering from a torn ACL and would likely not be ready until midseason.

New Vikings head coach Kevin O’Connell offensively coordinated Beckham for a few months in Los Angeles. The two men won a Super Bowl together. If Beckham lands anywhere soon based on “coaching ties,” it should be the Rams or Vikings. He won his chip with Sean McVay and Kevin O’Connell.

Had the Rams flamed out of the 2021 playoffs, perhaps the connection would be dampened. Alas, they did not. Beckham put an exclamation point on his career with O’Connell co-running the Rams offense.

Player-coach ties matter in sports, so this should be considered the shiny evidence on why Beckham could find a way to the 2022 Vikings roster.

Vikings wide receiver Justin Jefferson and Beckham attended LSU, albeit six years apart. It would probably be a mini-dream for Jefferson to collaborate with Beckham, who some consider the gold standard for LSU wideouts.

Plus, Danielle Hunter, also an LSU alumnus, was on the same team as Beckham at LSU. On top of that, Patrick Peterson attended LSU as well.

Sometimes players like to “stick together,” and the Vikings employ a handful of notable Tigers.

Patrick Peterson re-signed with the Vikings in 2022 because he believed the roster was “stacked.” He’s not making that up, at least per his perception.

Evidenced by roster moves — or lack thereof — Minnesota is “in it to win it” this season. Some onlookers of the Vikings scoff at the idea, but the new general manager and head coach assessed the roster and decided the enterprise was ready to win now.

Beckham has shown a desire to join “winners” since the New York Giants experiment went pear-shaped. For a minute inside his Cleveland Browns stint, Cleveland felt like a Super Bowl contender. When it was apparent that was false in 2021, he forced his way out of town.

And then he won a Super Bowl.

Of course, there is no guarantee that the Vikings are on the cusp of Super Bowl contendership, but they believe it so. That sales pitch could help land Beckham via free agency.