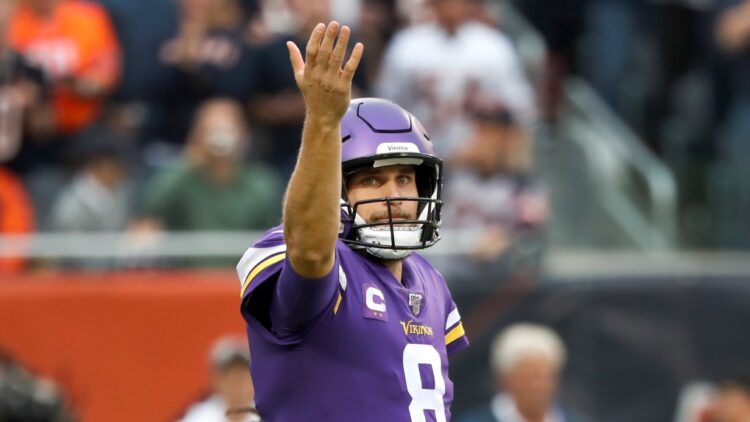 Charles Rex Arbogast, The Associated Press. Minnesota Vikings quarterback Kirk Cousins motions to a wide receiver during the first half of an NFL football game against the Chicago Bears Sunday, Sept. 29, 2019, in Chicago.

The offseason is the time for rankings. Everyone in the sports media ranks teams, quarterbacks, and offseasons. So did Pro Football Focus when Seth Galina released his 2022 NFL quarterback tiers.

Some of the quarterbacks are ranked in bizarre spots. Kirk Cousins’ ranking on the lists is entirely debatable. He has the stats on his side, yet many people claim that he’s missing essential intangibles and focus too much on his flaws.

What everyone should see the same way is that he is a good quarterback with flaws in some areas. However, the tier Seth Galina puts Kirk Cousins, the Vikings passer, in doesn’t seem right.

This tier has the name ‘Golden Oldies – Playing at an elite level over the age of 30’. The first two names, Tom Brady and Aaron Rodgers, are better than Kirk Cousins. Not a single sane person could argue against that.

The third player is Russell Wilson. Wilson struggled in 2021 and at the end of 2020. He’ll play behind a good offensive line in Denver and has good receivers and running backs to help him. He has played at a higher level than Cousins for most of their careers, is more consistent, and has a higher ceiling. The ranking above Cousins could be argued with recency bias but is undoubtedly correct.

Matthew Stafford made the tier, too. His Rams won the Superbowl, which automatically puts him higher than in recent years. The defense was the biggest reason for the success, although his strong play in crucial parts of the games can’t be disputed. Cousins had a higher grade in PFF than Stafford in each of the last four seasons.

Unlike Stafford, putting Matt Ryan in this group should raise eyebrows. He is still a solid quarterback but nowhere near the prime version of Matt Ryan in 2016. Even Seth Galina’s PFF ranked him 17th among 37 eligible quarterbacks in 2021. Ryan may benefit from a better supporting cast in Indianapolis. However, Ryan played with Julio Jones and Calvin Ridley in 2019 and still was just the 16th-ranked quarterback in that season. He just turned 37, and to expect an elite season appears to be a stretch.

Cousins Missed Out on Tiers B And C

Tier B has the name ‘The Best Under the Age of 30’. Kirk Cousins is 33 years old. He is not eligible to be in that group.

Unlike Tier B, Cousins is qualified to be part of Tier C, and the description fits him perfectly: ‘Mixed bag – the most polarizing players.´ Cousins is a very polarizing player on social media, and he can be a mixed bag, as he played at an elite level in the second half of the 2020 season and most parts of the 2021 campaign. He has a poor game mixed in too often. There’s no denying that even his biggest fans have to admit that reality. On the other hand, even his biggest haters have to agree that he plays at an elite level more often than not, especially in the recent one-and-a-half seasons.

Seth Galina moves on by describing the players in that group, and the description, again, sounds like a perfect description of the Vikings’ quarterback.

“Here is a group of players that half of the entire Earth believes is elite while the other half believes the opposite. There is, apparently, no in-between.”

Seth Galina, PFF, about the players in tier C

Even if those words sound like comments about Kirk Cousins, he is not part of the group, unlike Dak Prescott, Kyler Murray, and Derek Carr. Per PFF grades, the Viking played better than all three in 2021, despite poor play calling and pass protection. To invent a tier that perfectly sums up Kirk Cousins and not include him in that tier is surprising.

The tier has the (slightly disrespectful) name of ‘Play-Action Merchants – Propped up by Scheme.’

If the offensive scheme, designed by Klint Kubiak, really helped Kirk Cousins in his fourth season with the team, well, that seems highly doubtful. The Vikings only used play-action the 23rd most in the NFL in 2021. Kirk Cousins still played at a borderline elite level, per PFF grade. He ranked sixth among NFL quarterbacks with a grade of 88.2.

Cousins didn’t even make the top spot of the group, as he ranked below Ryan Tannehill, whose Titans used Play action the fourth-most in the league.

Kirk Cousins is extremely good at play-action. His passer rating in 2021 on such passes was 115.9 on about 20% of his passes. However, his passer rating of 99.9 on non-play-action passes is still pretty good. It’s 10 points better than Derek Carr’s, who made the tier C.

The positioning of Kirk Cousins is a true head-scratcher in Seth Galina’s quarterback tiers. He played better than players in tier A, while tier C sounds like it was invented for the Vikings passer. Putting him in tier D is just incorrect even by the measurements of Seth Galina´s company, PFF. He remains one of the most underrated players in the NFL.