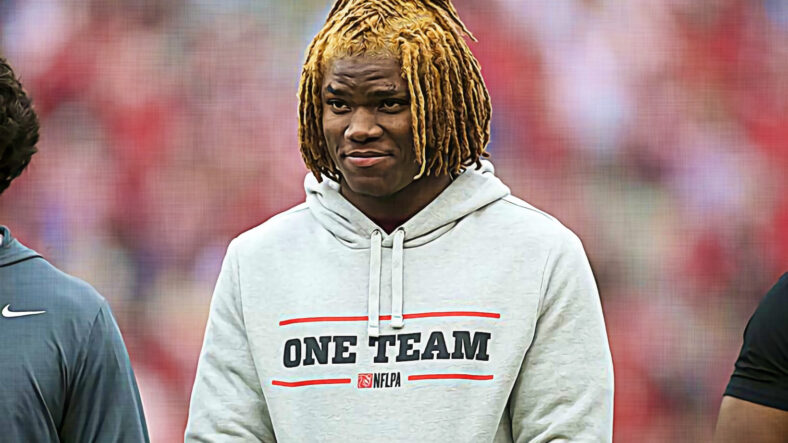 Georgia safety Lewis Cine, who played at Everett High, was taken with the 32nd and final pick in the first round of the NFL Draft by the Vikings. BRETT DAVIS/ASSOCIATED PRESS

The Minnesota Vikings selected Georgia safety Lewis Cine in the 1st Round of the 2022 NFL Draft. But the 22-year-old believed he was heading elsewhere.

New Vikings general manager Kwesi Adofo-Mesnah conducted some emotive in-division trades during the draft, doing business with the Detroit Lions and Green Bay Packers. The first byproduct of the bargaining for Minnesota was Cine, a hard-hitting National Champion from the SEC.

And while Adofo-Mensah was wheeling and dealing, Cine thought he would be selected by the Tampa Bay Buccaneers.

Unkept promises by NFL teams on draft night aren’t uncommon. In April, Jalen Ramsey revealed the Dallas Cowboys assured the cornerback he’d be their choice back in the 2016 NFL Draft, but Jerry Jones selected Ezekiel Elliott instead.

Similarly, in 2022, Cine was evidently tricked by the Buccaneers. Tampa Bay held the 27th pick, presumably where Cine would be plucked, but sent the pick to the Jacksonville Jaguars, who used the selection to nab Devin Lloyd, a linebacker from the University of Utah.

The Buccaneers already employ Antoine Winfield Jr., a safety from the University of Minnesota who Vikings fans wanted in the 2020 NFL Draft, and Logan Ryan, a free agent from the New York Giants. Unless Tampa Bay had funky plans afoot, Cine wouldn’t have received ample playing time out of the gate.

With the Vikings, though, Cine must “only” uproot Camryn Bynum from the free safety job. Minnesota uses Harrison Smith at strong safety, and he’s a staple of the Vikings defense. But the FS gig is more attainable, especially for a violent defender drafted in Round 1.

It is unclear if Cine was truly irked by the Buccaneers snub, but at least he’ll get on-the-field playing time in Minnesota sooner than in Tampa Bay. Conversely, the Buccaneers, led by the unretired Tom Brady, are a virtual lock to reach the playoffs in 2022, whereas the Vikings are in a hopeful wait-and-see mode.

The Vikings rookie minicamp gets underway later this month.