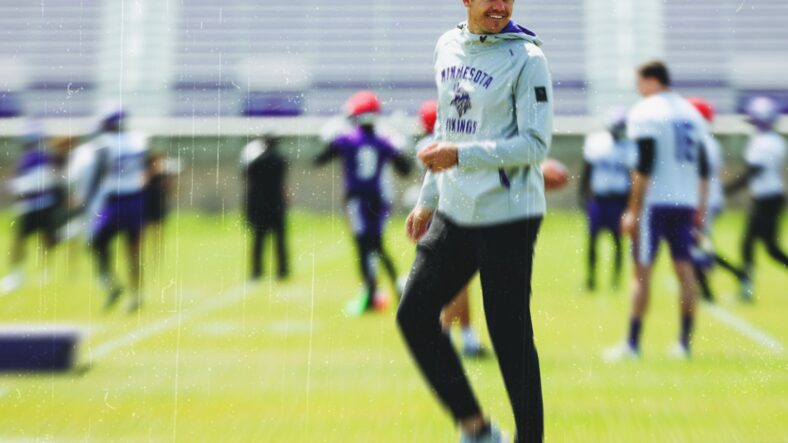 The honeymoon is over, at least from a national perspective.

Kevin O’Connell was hired in February to take over for Mike Zimmer, who coached the Minnesota Vikings for eight seasons. Since 2014, the Vikings are the NFL’s tenth-best franchise per wins and losses, so O’Connell indeed has an uphill climb to supplant “the Zimmer standard” for win percentage.

Pro Football Network ranked NFL coaches from 1 to 32 this week, and the Vikings new skipper curiously checked in at #32 — or dead last in the business. In fairness to PFN, it reserved a bottom-of-the-league tier for new head coaches, and O’Connell just so happened to be the man PFN tabbed for very last.

Mike Kaye from Pro Football Network said about O’Connell’s dead-last ranking, “Kevin O’Connell, despite being a former NFL QB and coordinator, is the mystery man among the head-coaching ranks. While the Vikings kept their roster mostly in place, O’Connell will clearly bring his own ideas to the table. O’Connell is a true wild card, for better or worse.”

Generally speaking, it’s odd to rank a head coach who’s never coached an NFL game. Of course, PFN is free to do whatever it pleases, but perhaps creating a category labeled To Be Determined would’ve been a more appropriate tier for men like O’Connell, Matt Eberflus, Nathaniel Hackett, and others who finished near the bottom of the pack.

O’Connell can debunk this lousy ranking during the 2022 regular season, which is 12 weeks away. He was basically the victim of experience for Kaye’s rankings, and an impressive start to his career with the Vikings will change the dialogue real quick.

The 2022 Vikings, under O’Connell’s tutelage, renewed in-it-to-win-it stakes once again. In each season since the start of 2016, Minnesota has constructed a roster it felt worthy of contending for a Super Bowl. When Rick Spielman and Mike Zimmer were fired though, some Vikings faithful believed the new leadership would burn the roster down and start over. But Kwesi Adofo-Mensah and O’Connell did the inverse, re-upping with quarterback Kirk Cousins and signing free agents Za’Darius Smith, Harrison Phillips, and Jordan Hicks. After that, Adofo-Mensah focused on defense in the 2022 NFL Draft, onboarding rookies who should start sooner than later with Lewis Cine, Andrew Booth, and Brian Asamoah.

Vegas insiders perceive Minnesota as an eight or nine-win team. Some pundits forecast the Vikings as a sleeper playoff team, so something’s gotta give.

O’Connell shouldn’t have a hard time shedding the “worst HC in the league” label, but according to Pro Football Network, he is that guy right now.