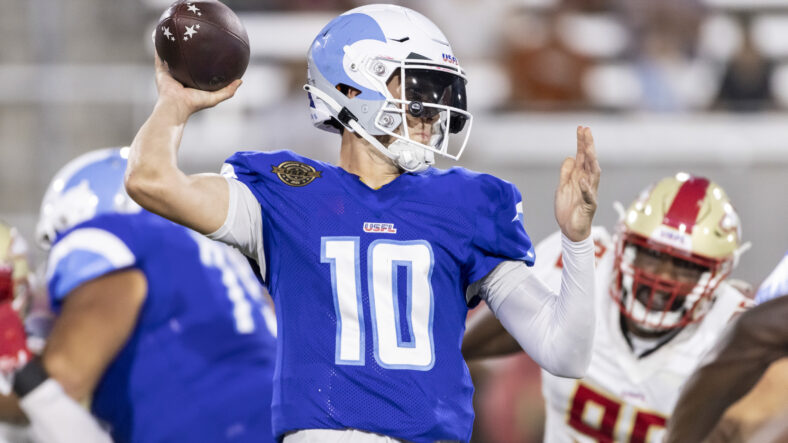 Multiple former Vikings play in the new league, the USFL. DeMarquis Gates, a linebacker who was part of the 2020 Vikings 90-man roster in preseason, is 5th in the league in tackles. He recorded 27 tackles in just three games. Additionally, he has two and a half sacks, one interception, and two passes defended. A player with stats like this has a chance to play in the NFL.

Running back Thomas Brooks-James was a member of the Vikings practice squad in 2019 and part of the preseason roster in 2020. The Birmingham Stallion is among the best in the league in yards per run with over five yards.

For the fourth time, a league named ‘USFL’ is trying to become the second professional football league in the United States. All other attempts have failed so far. The NFL is dominating the sport. It would be good for football in general if there were another product. Especially former NFL players that don’t make the league on the first try could get a second chance after showcasing their talents in the USFL.

In addition to that, the league is important to test rule changes and technical innovations for the NFL. For example, the USFL removed the chains to measure first downs. The footballs have chips implanted that can determine if a first down was reached or not. The famously used index card of Gene Steratore to make a ruling on the first down could become obsolete.

Kyle Sloter was a Minnesota Viking between September 2017 and August 2019. At the end of the 2021 season, he had a second stint with the Vikings for one week because Sean Mannion tested positive for COVID. In the 2018 and 2019 preseason, he had excellent outings, but the Vikings didn’t think he was good enough to make the roster in 2019 over Sean Mannion.

In the USFL draft, the New Orleans Breakers selected the former Vikings quarterback in the first round. He had a slow start, as he just had 150 passing yards in week one without a touchdown but with one interception. However, his team won. He added 30 rushing yards on just four runs.

In his second game, he lit up the Tampa Bay Bandits and scored three touchdowns – two passing and one rushing touchdown. He ended the day with 266 passing yards in a dominant 34-3 win.

The Breaker’s only loss in the first USFL season occurred in Week 3 when quarterback Kyle Sloter finished the game with 241 yards, two touchdowns, and one interception. His team lost 13-22.

At the end of the fourth game, the team from New Orleans won 23-16 and were 3-1 in the standings. Sloter was three yards shy of a 400-yard game and added one touchdown and three interceptions. The game was unnecessarily close, as the Breakers outgained the Houston Gamblers by almost 400 yards.

Three interceptions are obviously too much, but Sloter is a gunslinger. He takes risks, and sometimes that can backfire. There are two types of desired backup quarterbacks in the NFL. One is a game manager who doesn’t win a game but doesn’t lose it either — someone who can finish with a stat line of 180 yards without touchdowns or interceptions. The other type is a gunslinger — someone with moxie, who replaces the starter and can light up a team with three touchdowns and inspire the whole team. However, he can single-handedly lose a game, as well, with three interceptions. Both types of backups have their pros and cons.

The former Vikings quarterback leads the USFL in passing yards by over 400. He has 1,054 yards, and the second, Jordan Ta’amu, has 627. The combination of team success and his play in a pass-first offense could be the reason why he gets another chance in the NFL. His NFL preseason stats are still god-like. 1,222 passing yards on 74% completed passes, with 11 TDs and just one interception.

Sloter spent time on the Broncos, Vikings, Cardinals, Lions, Bears, and Raiders. He was part of the 53-man rosters of the Vikings and the Lions. In 2017, he was the backup for Case Keenum for multiple weeks when Sam Bradford and Teddy Bridgewater were injured. However, he has never thrown a single pass in the NFL outside of the preseason.