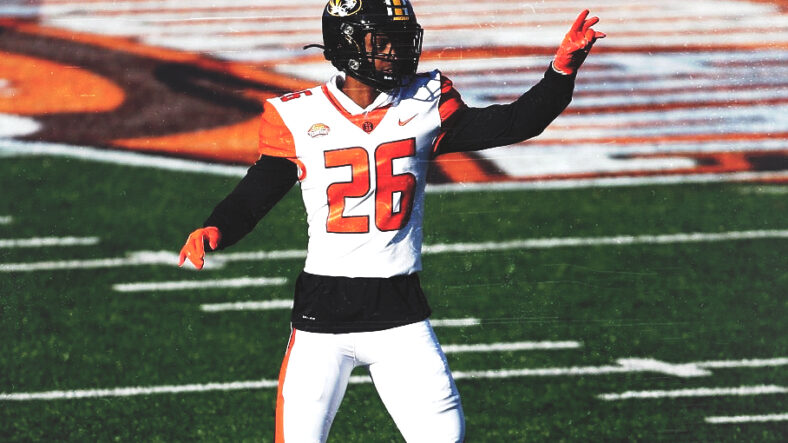 The Minnesota Vikings now have 80% of the 2022 draft class under contract as 4th-Round cornerback Akayleb Evans made it official with the team on Wednesday.

Coincidentally, Evans signed the dotted line on his birthday. Evans turned 23 on Wednesday.

Vikings fans became familiar with Evans a few months ago when general manager Kwesi Adofo-Mensah told the Pioneer Press about his unusual scouting strategy for the Missouri alumnus. Adofo-Mensah said about this discovery of Evans, “Evans was a guy I remember watching at night. I’d sometimes watch him in the dark, and you’re looking at his size…”

Until Wednesday, a logjam existed for rookies from the 4th Round as a running back named Dameon Pierce from the Houston Texans received a contract with $25,000 more than usual, resetting the market in a junior way for 4th-Rounders. Evans’ contract should be four years and $4.4 million when the ink dries.

Evans was a moderately expensive addition to the Vikings roster back in April. Adofo-Mensah conducted a flurry of trades during the NFL draft, and Evans was the byproduct of a trade with the Cleveland Browns, Adofo-Mensah’s previous employer. He shipped a 2022 5th-Round pick and a 2023 4th-Round pick to Cleveland for the draft pick that netted Evans. But that’s evidently a small price to pay for a man admired late at night by a first-year general manager.

The Vikings employ a handful of corners who figured to command a lot of playing time, including Patrick Peterson, Cameron Dantzler, Chandon Sullivan, and rookie Andrew Booth. Yet, somewhere around the CB4 section of the roster, Evans will compete for defensive snaps.

The rookie from Missouri is tall and lean, considered a disruptor in the passing game. Per scouting reports, he’ll need to develop his tackling acumen, but that isn’t too surprising for a slender young cornerback.

Next, the Vikings will work on finishing contractual negotiations with two rookies, the aforementioned Booth from Clemson and Ed Ingram from LSU. Only around half of the players drafted in the 2nd Round are under contract leaguewide, and Booth and Ingram are among the men late to the party.

Before transferring to Missouri in 2021, Evans was teammates with Zaven Collins at Tulsa, a linebacker drafted in the 1st Round of the 2021 NFL Draft.

Since the AFL-NFL merger in 1970, the Vikings have drafted just one player from the 4th Round who later reached a Pro Bowl — Everson Griffen in 2010.