Every Vikings Fan Should Know the Spin Doctor 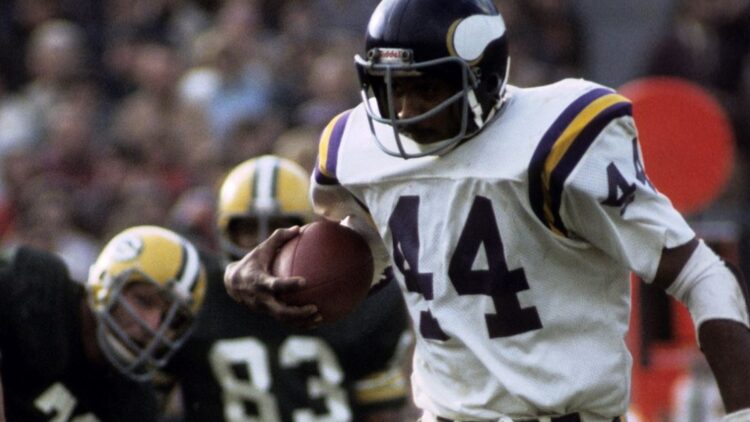 Just like in 2022, the Minnesota Vikings held the rights to the 12th overall pick twice before. Once, they took Christian Ponder. The other time, they picked a future legend of the franchise — a running back that looked like a modern-day NFL running back who traveled back in time to play in the 1970s.

He could easily play in the NFL in 2022. In the 1973 NFL Draft, the Vikings general manager, Jim Finks, chose the running back of Miami, Florida.

Chuck was born Walter Eugene Foreman in Frederick, Maryland, over 71 years ago. He attended Frederick High School and was a multi-sport athlete, as he played basketball and football and was part of the track and field team. Surprisingly, Foreman didn’t play running back for his team. He played the end position. Something nowadays is better known as either tight end or wide receiver.

Foreman was an excellent basketball player. He received more offers to play basketball at the college level than football. Despite that, he decided to play football for the University of Miami, as he simply enjoyed the sport more than basketball. He leaned towards playing at home in Maryland. That changed once Miami scouted a teammate of his, and he stole the show. That´s how he got attention from the Hurricanes.

Something rare today, Foreman played multiple positions in college. In 1970, his second season, Foreman had a limited role on offense. Not because he wasn’t good enough, he just played cornerback after multiple injuries in the secondary. He still recorded about 200 rushing yards and added 100 yards receiving.

The Hurricanes hired a new head coach, Fran Curci. Foreman led his team in rushing yards in 1971 and 1972 after Curci switched him back to running back. 1971 was his best season as a pure running back, as he recorded almost 1000 yards on the ground, paired with 10 touchdowns. Together with teammate Tom Sullivan, the running back tandem was called ‘The Gold Dust Twins.’ However, he was not a part of the passing game. His number of receptions even declined compared to his year as a cornerback.

That would change in 1972. Foreman played more wide receiver than running back. The results were 484 yards on the ground and 557 through the air. He found the end zone three times each as a receiver and as a runner.

Another interesting anecdote of his career is that he had fumbling issues in college because he held the ball very loosely, and at times, he hit the ball with his own knee and which resulted in a fumble. Weeb Ewbank, the head coach of the New York Jets at that time, taught Foreman how to carry the ball correctly at the senior bowl.

Chuck Foreman became the newest member of the Vikings in the 1973 draft. After he found out that he’ll play in Minnesota, he was not amused because of the cold in the north.

The Vikings didn’t know how to utilize their versatile first-round pick, but he wanted to play running back, mainly because his former college coach Curci said he could never play running back in the NFL.

The former Miami Hurricane hit the ground running. He led the team in rushing yards in his rookie campaign and was second in receiving yards. He finished the year with 801 yards on the ground and 362 yards as a receiver. Foreman found the end zone six times and was named NFL Offensive Rookie of the Year, and was voted to his first Pro Bowl. The franchise has beaten the Redskins and the Cowboys in the playoffs and lost the Superbowl to the Dolphins. Foreman was limited to 41 scrimmage yards in that game.

In his second season, Foreman had comparable success. He was once again voted to the Pro Bowl and was named to the second-team All-Pro after leading the league in touchdowns from scrimmage with 15. Like the year before, the Vikings would lose the Superbowl, this time to the Steelers.

The star running back had tremendous success in his third year in the NFL. He broke the NFL record for most receptions in a single season by a running back with 73, which was good enough to lead all NFL players, receivers, and running backs, in receptions. Nationally, he received high honors once again, as he appeared in his third consecutive Pro Bowls in as many years. He was part of the first All-Pro team for the first time in 1975, something he would repeat in 1976.

In the last game of the 1975 season, the Vikings played against the Buffalo Bills and their star running back, O.J. Simpson. They both tried to break Gale Sayers’ record for scrimmage touchdowns in a season in that game. After his third touchdown, a Bills fan hit Foreman in the eye with a snowball. Foreman still scored his fourth touchdown and tied the record at 22. However, coach Bud Grant benched his runner as a precaution. Simpson later broke the record with a 64-yard touchdown run.

Foreman became the first 1000-yard rusher in Vikings’ franchise history, with 1,070 yards. To this day, he is one of three Vikings with four touchdowns in one game. Dalvin Cook and Ahmad Rashad reached that milestone later. When he retired, Foreman was the franchise leader in rushing yards, touchdowns, and receptions.

Foreman is a two-time first-team All-Pro, three-time second-team All-Pro, five-time Pro Bowler, member of the Vikings ring of honor, and part of the 50 Greatest Vikings. Foreman’s playing style as a receiver out of the backfield would be perfect for today’s NFL. He was ahead of time about 40 years and should still be considered one of the most versatile backs in NFL history.

Players with his accolades should be enshrined in the Hall of Fame, but Foreman is passed over to this day. In 2020, after another year without Hall of Fame consideration, Chris Tomasson from the Pioneer Press talked with Foreman about the subject:

I’m laughing about it. That’s what I think about it. … I don’t know how they choose and pick but I have done a little research and I find that my stats are better than most. … I look at my time, and there’s a lot of ones that were good but there aren’t any that were better (at running back).

Chuck Foreman about the Hall of Fame

His career is not totally forgotten. Just recently, Foreman landed on the list of top 5 underappreciated running backs of all time, a list by NFL Network’s Peter Schrager.

He might not be in the Hall of Fame, but he is still one of the most beloved and respected former players among Vikings fans. If you are one of his fans, you might be lucky. Foreman plans to have some local meet-and-greets.

A true franchise legend, he is still third on the all-time Vikings rushing list. Foreman only trails Adrian Peterson and Robert Smith. He reached the end zone at least three times in seven different games. Once more, the most in franchise history. Not even Adrian Peterson, Cris Carter, or Randy Moss could reach that number. Additionally, he is still leading the franchise in postseason rushing yards and touchdowns.