Cameron Dantzler Has Added Weight and Looks to Impress 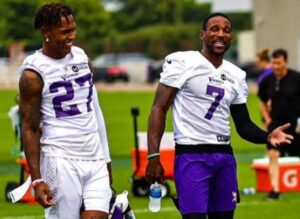 The first two years in the NFL have been a roller coaster for Minnesota Vikings cornerback Cameron Dantzler. Drafted in the third round in 2020, he surprised everybody by outperforming Jeff Gladney, a cornerback drafted in the first round of the same draft.

Dantzler finished his rookie season on the 2020 All-Rookie team, a fantastic achievement. The real roller coaster started last season, something Dantzler spoke about when discussing his frustration at being sat behind a struggling Bashaud Breeland. It was often said last season that he was in Mike Zimmer’s doghouse for reasons that weren’t particularly clear.

Dantzler says his confidence is back and is ready to show what he can do. During the offseason, Dantzler has been adding weight and is looking to impress the new Vikings coaching staff.

Nicknamed The Needle due to his tall and slim frame, adding some weight has always seemed necessary for Dantzler to have a long and successful career in the NFL. He weighed in at 182 lbs during his rookie season, while he was at 185 lbs for last season. He’ll arrive training camp this year at 191 lbs.

The gradual increase over two years suggests the weight gain has been done right and is a gain of muscle mass. In his own words, he has been “getting my body right. I’ve used the offseason to get better. I’ve got a nutritionist. I’m lifting weights.” So hopefully, there shouldn’t be any effect on the sharpness and speed of Dantzler’s game.

The prime weight for an NFL cornerback is around the 190-205 lbs mark. Less than 190, and a player will have to make up for their lack of size somehow. Over 205 and speed is likely to be a problem, though if you can get a cornerback over that weight playing heavy and fast, you have a real talent on your hands. The Vikings had one in Xavier Rhodes when he was at his very best.

At 191, Cameron Dantzler now enters that prime range for a cornerback. It should make for an interesting battle between himself and rookie Andrew Booth Jr for the starting spot opposite veteran cornerback Patrick Peterson.

In an ideal world for the Vikings, Dantzler and Booth will flourish this season and consolidate the long-term future at the cornerback position. Playing with a top-class veteran like Patrick Peterson should give them that opportunity. Then, when Peterson’s time in Minnesota comes to an end, Dantzler and Booth will be ready to lead this team in the secondary alongside this year’s first-round pick Lewis Cine.

That scenario coming to fruition, perhaps along with Camryn Bynum continuing to emerge at safety alongside Cine, would give the Vikings a bright future to look forward to in that area of the defense.

Cameron Dantzler adding weight and, by all accounts, still looking sharp is a big bonus for the Vikings. The camp battle between him and Booth should be fun to watch and only serve to make both better. The secondary was such a massive problem for the Vikings last season. This year the outlook is already looking much brighter.