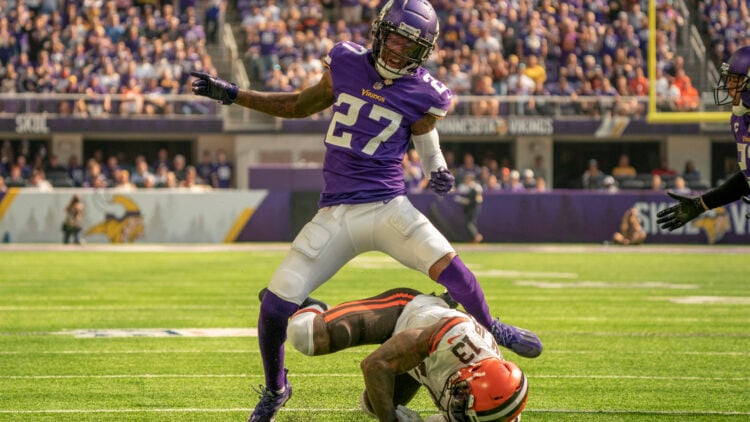 First, when the 2020 regular season capped in January, Dantzler wound up as the NFL’s top rookie corner, earning a praiseworthy 70.9 grade from Pro Football Focus. Next to the possibility of winning a Defensive Rookie of the Year award, that is about the best imaginable foundation for a young defensive back to build upon. Ergo, the future was blindingly bright.

Dantzler was forecasted as the Vikings CB1 for 2021 – he played that damn good in 2020. Free agency hit, and the franchise signed Patrick Peterson, a player with an All-Pro spine, to act as Dantzler’s running mate. What a perfect partnership for an already-stellar young corner.

The pathway to Dantzler’s continued progression wholly cleared when fellow rookie corner Jeff Gladney got into trouble, leading to his release from the organization and possible prison sentence. In a weird way, this intensified Dantzler’s grip on the starting job.

But then general manager Rick Spielman signed Bashaud Breeland away from the Kansas City Chiefs. Inch by inch, Breeland seized the starting job opposite Peterson while Dantzler quietly fell into the backdrop.

Dantzler didn’t help his case when the Denver Broncos – K.J. Hamler in particular – torched him in a preseason game at U.S. Bank Stadium. Suddenly, on the first unofficial depth chart of the year, Danzlter was kicked down to CB6, if that can be believed.

That’s right, the NFL’s best rookie CB was irrelevant for some Godforsaken reason. The saga continued as Dantzler played sparingly in the Vikings first three games of 2021. He was frustrated by the ordeal, cocking off on Twitter his resentments. With each post, he’d delete his lamenting words soon after.

For the team scope, a lack of Dantzler was maddening because Breeland was awful to start the season. His PFF score is still horrendous. In fact, he’s the NFL’s worst cornerback through four weeks. It’s mind-boggling.

Yet, Mike Zimmer and friends finally got with the program, inserting Dantzler into the Week 4 game against the Cleveland Browns. He thrived.

At the moment – with a relatively small sample size – Dantzler is the NFL’s sixth-best corner per PFF. And, check your notes – sixth-best is better than dead last.

Therefore, the earth returned to its axis, and the Mississippi State alumnus was usurping Breeland for playing time. Coincidentally, the Vikings showcased their best defensive performance of 2021 with Dantzler getting a lot of action. Amazing how that works.

Here we are. All is well, right? Not quite.

Dantzler now has the coronavirus, so the soap opera persists.

#Vikings CB Cameron Dantzler was placed on the Reserve/COVID-19 list, per the wire. He tested positive.

Thankfully, Dantzler is vaccinated, substantially increasing his prognosis for recovery. But the tilt-a-whirl of his 2021 season is like Hard Knocks in motion.

He’s optimistic about his return:

Fully vaccinated so this shouldn’t have me out to long. Keep me in you guys prayers. 🙏🏽

The general population will likely never know why Dantzler took up residence in Zimmer’s doghouse for a month. And sure, the immature tweets did not help. Nevertheless, when Dantzler is on the field, he’s arguably the best cornerback on the depth chart.

Without any hiccups and per his own non-deleted tweet, he should return within a week. Hopefully, for his well-being and the team’s sake, his orbit of oddities is over.