All the Vikings Free Agents in Limbo 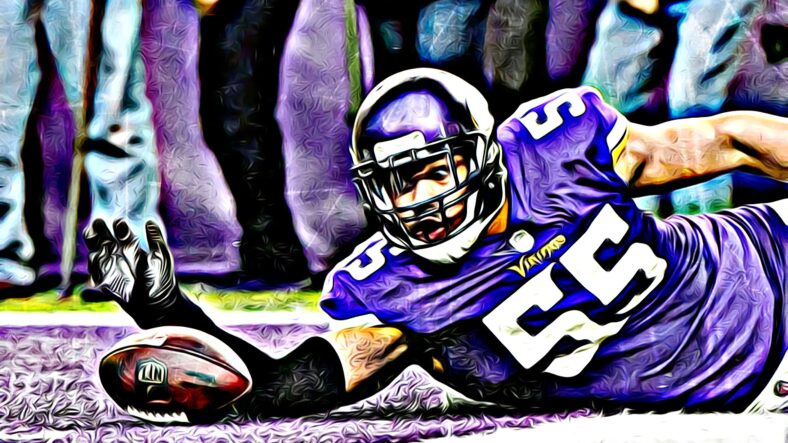 These are the players who were a part of the Vikings 2021 roster remaining unsigned as of April 3rd.

Alexander started the 2021 campaign somewhat effectively but faded fast down the stretch. Because of that, he is not expected to return with the 2022 Vikings.

Barr’s status in early April is a large mystery. There has been no chatter about the UCLA alumnus — either about rejoining the Vikings or conversing with other teams.

When Kevin O’Connell was hired, he went out of his way to compliment Barr at his introductory press conference, signaling a possible reunion. But that was the extent of the discussion, at least outwardly.

Barr is unlikely to return with the Vikings after the addition of Jordan Hicks from Arizona.

Beebe was hurt all of 2021 but is a lovable roster piece among fans. Son of former NFLer Don, Chad Beebe caught 26 passes for 310 yards and two touchdowns since 2019.

Like Alexander, Beebe is a longshot to return this summer.

Gallman was signed by Minnesota in 2021 when the running back room was skimpy due to injuries. He did not have a single rushing attempt.

The Vikings will welcome back Dalvin Cook, Alexander Mattison, and Kene Nwangwu in 2022. so Gallman is not a hot commodity. The journeyman halfback will land elsewhere as an RB3.

Griffen was marvelous last season before encountering a bout with mental health, which he and the Vikings navigated with grace. He notched five sacks in nine games, keeping the defensive line glued together for a few games when Danielle Hunter was lost of the season.

Yet, the coaches keeping Griffen associated with the Vikings, Mike Zimmer and Andre Patterson, are no longer for the organization.

Quietly, this man played 72 games for the Vikings in six seasons. He was a textbook backup offensive tackle.

The problem? When the Vikings would slide Hill into the starting lineup, he wasn’t very good. In theory, Hill could return as a depth tackle, but don’t bet on it.

Richardson was versatile in 2021, playing defensive end and defensive tackle after the Hunter injury.

He played for the Vikings in 2018 and 2021 — both ill-fated, mediocre campaigns for the organization that were peppered with high stakes by the team’s ownership and fans.

The 31-year-old will sign with a different team — and maybe even start from time to time.

A decent punt returner for Minnesota last season, Westbrook never really caught on as WR3 or WR4, as was the expectation when he signed in the summer of 2021.

He has ties to Keenan McCardell, the only Vikings coach on Mike Zimmer’s staff to survive the coaching staff turnover to Kevin O’Connell.

There’s a reasonable chance Westbrook returns to the Vikings sometime this summer because of his McCardell ties.

If he rejoins the Vikings, it will be to compete for a reservist EDGE rusher gig.