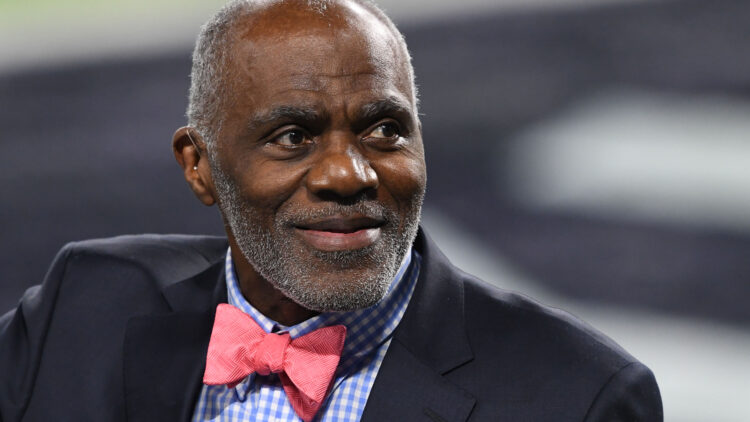 Feb 4, 2018; Minneapolis, MN, USA; Alan Page former football player looks on from the field during a stoppage in play in Super Bowl LII between the Philadelphia Eagles and the New England Patriots during the first half at U.S. Bank Stadium. Mandatory Credit: John David Mercer-USA TODAY Sports

Recently, CBS Sports released a list of the Top 10 defensive players of all time. Jeff Kerr created this list. While it is difficult to argue with some of his takes, one thing is sure. He snubbed Alan Page.

Alan Page was an anchor in the Purple People Eaters. He may have been the best guy in that group, and I would argue that he is the best. So, why in the world would he not be in the top 10 best defensive players of all time?

To answer why he should be listed here, we will get into the nitty-gritty. How does he stack up against these other guys? After all, all of these guys deserve to be mentioned on the best of all-time lists.

Alan Page’s Career is Nothing Short of Legendary

If you asked a Vikings fan to describe Alan Page, what would be the first thing they would say? For me, I would say Hall of Fame pass rusher who dominated opposing offensive lineman. Although I never got to see him play as I am too young, this is clear as day.

Page was not only a great player. He helped to define who the Vikings are today. The Purple People Eaters’ motto of “meet at the quarterback” is the stuff of legends. Not only did he help define the Vikings, but he also had an amazing career.

His career stats are one of the reasons he is in the Hall of Fame today.

When looking at his career stats and awards, one thing is clear. He dominated the NFL in his time.

How Page Stacks Up Against the Rest

To paint the picture of why he should be listed in the top-10 all time, we need to compare Page to the others on that list. I will not argue against the top-5 listed. They all clearly belong there, so let’s look at 6th through 10th.

While you cannot disregard the greatness that all of these players had during their careers, it seems that Alan Page deserves to be placed above a couple of these guys. Once you consider the accolades, stats, and what each player meant to their team, I believe Page should be listed above Lott and Woodson.

Alan Page was a menace. He defined an era of the NFL and is the only player here with an NFL MVP. It is a shame that CBS Sports doesn’t have him listed on the top-10 of all time.