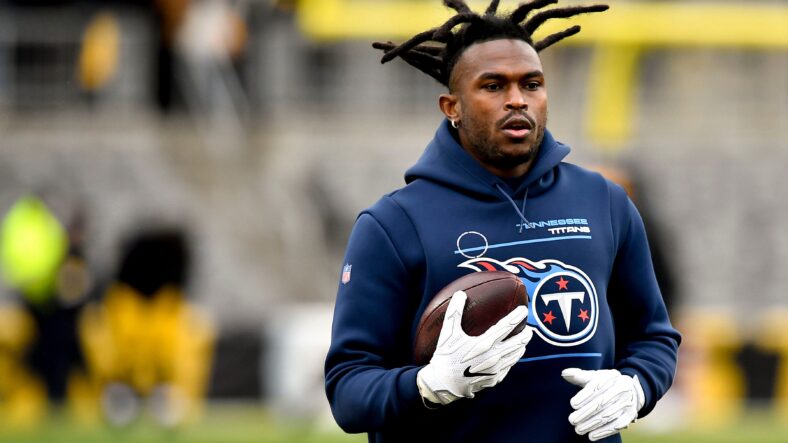 The Vikings had a good offense when the offseason started. They kept the best option at quarterback, Kirk Cousins, have three strong wide receivers, a tight end with potential, and the running back is a star. The offensive line was the biggest weakness in recent years, and it’s unclear if the team fixed it.

At the very least, they brought in multiple players to improve the unit. Chris Reed, Jesse Davis, and Austin Schlottmann were free-agent signings. Additionally, general manager Kwesi Adofo-Mensah selected Ed Ingram in the second round of the draft.

However, there’s always room for improvement, and some good free agents are still looking for new teams. At the draft’s conclusion, it’s always a good time to add players for less money than what they are worth, as the teams and rosters are set while players desperately want to keep playing football.

Ebron was the 10th overall pick in the 2014 draft, just one spot after former Vikings general manager Rick Spielman selected Anthony Barr. He turned 29 years old in April. Ebron never fulfilled the potential the Lions saw in him before they picked him. However, he is a solid tight end and has five seasons of 500 or more receiving yards to his credit, the most recent one in 2020. His best season was with the Indianapolis Colts in 2018, when he set career highs with 750 receiving yards and 13 touchdowns.

The Vikings’ tight ends are one of the weakest position groups on the roster. Irv Smith Jr has potential but is still unproven because of the presence of Kyle Rudolph and a knee injury in 2021. Behind him, the Vikings only have Johnny Mundt and Ben Ellefson, blocking tight ends without much catching experience, seventh-round rookie Nick Muse and the raw 2021 rookie Zach Davidson. Ebron would be the insurance policy if Irv Smith suffered another injury. The former Detroit Lion would also be a good addition to the passing game as another weapon for Kirk Cousins, regardless of Irv Smith’s health.

Teams know what they get when they sign Will Fuller. He is a dangerous deep threat expected to miss games due to injury every season. The fact that he is still available in May is a good indicator that he’ll be a cheap option.

Fuller has never played more than the 14 games he appeared in his rookie campaign in 2016. Overall, he played in 55 games over his six-year career. Injuries, and even suspensions, have to be factored in when teams think about signing the speedy receiver.

However, when he’s on the field, he makes every team better because defenses have to account for him, which opens up space for the other receivers. Jefferson and Thielen would either be more open, or Fuller could feast with Kirk Cousins, an outstanding thrower of the deep ball. In 2020, Fuller had a PFF grade of 86.2, when he had 879 yards and eight touchdowns for the Texans. After missing almost the full 2021 season, the former Miami Dolphin could be available for a cheap one-year prove-it deal.

The Vikings put a lot of resources into their offensive line in Kwesi Adofo-Mensah’s first offseason. He signed three interior offensive linemen and drafted Ed Ingram. However, the biggest weakness is at the center position, which he didn´t address. Garrett Bradbury is an average run blocker but an atrocious pass protector.

Tretter meanwhile, is an outstanding pass blocker. He ranked inside of the top-three centers in pass protection in four consecutive seasons, per PFF. After six of his last seven seasons in the NFL, PFF ranked him in the top-10 of centers. He could be the final puzzle piece for the offensive line and give Kirk Cousins enough time to find Jefferson and Thielen for big plays.

There are reasons why Tretter hasn’t been signed yet. He has knee problems and barely practiced in 2021, making his elite play even more impressive. However, he still started 16 games for the Browns in each of the last five seasons. He missed one game due to the COVID protocols.

Tretter is a high-risk, high-reward signing for the Vikings. If he stays healthy and continues to play at an elite level, the Vikings’ offense can be an elite and dangerous unit in Kevin O’Connell’s first season as a head coach after the signing of the free-agent center.

Jones turned 33 in February and is no longer the physically dominant force he once was. In the last two seasons, the former Alabama standout recorded just slightly above 1000 yards in just 19 games played. However, when he’s healthy, and the Vikings break the huddle with Justin Jefferson, Adam Thielen, and Julio Jones, the offense is almost impossible to defend, considering Dalvin Cook is a threat out of the backfield as well.

ESPN’s Bill Barnwell predicted a one-year contract of $5-6 million. The Vikings probably have to restructure the contracts of Dalvin Cook and Eric Kendricks to make another free agent signing possible unless the players sign a really cheap and team-friendly contract.

Odell Beckham Jr is a similar case to Julio Jones. He once was one of the elite receivers in the league. OBJ took the league by storm just like Justin Jefferson did. That was on full display when he broke the record for most receiving yards in a player’s first two seasons in the NFL, previously held by Randy Moss. The record has been broken by Justin Jefferson, but Beckham Jr. still ranks second on that list.

Like Julio Jones, the offense would be impossible to defend with Jefferson, Thielen, Dalvin Cook, and a healthy OBJ. His role would be the third wide receiver, which takes some weight off Justin Jefferson´s shoulders, as JJ already draws the top cornerbacks from every opponent. However, his health is the problem. He suffered his second torn ACL in the super bowl. In the playoffs, he showed his potential, but in the last two seasons, he just recorded 856 receiving yards in 21 games. In 2018 and 2019, the former LSU Tiger was a 1000-yard receiver.

Various reports suggest a comeback in November is possible. He will miss the first half of the season if that’s the case. However, Ian Rapoport said that his second torn ACL was actually a good thing. The first surgery didn’t go well, and therefore the knee wasn’t at 100%. The surgery after his second injury went well and has extended the career of the star receiver.

Because he is injured and his return is a question mark, he doesn’t cost a lot of money. The upside he brings to the table should be attractive for every franchise. He has familiarity with Vikings head coach Kevin O’Connell, as they won the Super Bowl in Los Angeles just last season. In addition to that, Justin Jefferson, the Vikings’ star receiver, and OBJ are friends. These relationships could play a role in getting Odell Beckham Jr to Minnesota.