The Thinnest Positions on the Vikings Roster

The Minnesota Vikings have drastically improved the depth of their roster this offseason, especially at positions of need such as cornerback and the guard spots. Veteran additions of Jesse Davis and Chris Reed should help the o-line, and an influx of young talent like rookies Andrew Booth Jr. and Akayleb Evans should play roles on the Vikings defense.

That said, there are still areas on Minnesota’s roster that could present problems for the team, especially if starters were to miss some time. Here are four of the thinnest positions on the Vikings roster as of right now.

Obviously, there’s been concern surrounding the Vikings backup quarterback spot for a few years now. Sean Mannion has held the job for the past two seasons; a player that has thrown one touchdown pass over his six-year NFL career. We saw how things went when Kirk Cousins went down with Covid last winter.

Kellen Mond was the plan to be the backup, but that seems to be a huge question mark so far in training camp. There is a growing concern that, especially if the Vikings first preseason game goes disastrously, they may need to look outside the organization for their backup QB.

The battle for the center position is in full-force, and again, this is a position that may have the Vikings searching for outside options. Garrett Bradbury has had massive struggles to this point in training camp. Additionally, the Vikings current backup options, Chris Reed and Austin Schlottmann, are better equipped to play guard than center. As long as Mond plays well on Sunday afternoon, center could actually be the single thinnest position on the Vikings roster.

This one may see some pushback given the fact that both Jordan Hicks and Eric Kendricks are well-equipped as starters in the Vikings new 3-4 defense. Behind them, though, the questions abound regarding the Vikings off-ball linebackers. Rookie linebacker Brian Asamoah brings oodles of potential to the NFL and has emerged as the first backup in Minnesota’s first depth chart release. However, if there are growing pains for Asamoah, the other backup options carry numerous question marks.

Troy Dye is the other player in the first backup tier, and his NFL career has gotten off to an underwhelming start. Additionally, Chazz Surratt had virtually no impact for the Vikings in 2021. Eric Kendricks is yet another veteran on this roster that is almost certain to miss at least a couple games this year. I have a hard time believing that these backup options can bring anywhere near the same impact as Kendricks to this defense.

The Vikings tight end position is only a concern if Irv Smith’s recovery from his thumb surgery extends into September. As long as he returns at 100% by the season opener, there isn’t too much concern here. However, if for whatever reason he misses the season opener, Johnny Mundt hast to go in as TE1 for the Vikings. Currently, he has just 10 NFL receptions over his five-year career.

The Vikings seem to believe that Mundt’s lack of production as a pass-catcher is similar to Tyler Conklin’s, and he just needs to get an opportunity. Vikings fans can relate to this as Conklin went into the 2021 season with just 32 receptions over three years. Last year, he caught 61 of 87 targets. It’s certainly possible that Mundt could have a similar emergence if Smith has to miss extended time, but he is certainly less proven than even Conklin was going into last year. 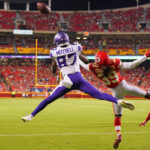