The GM’s Keys to Vikings Beating the Packers to Return to .500 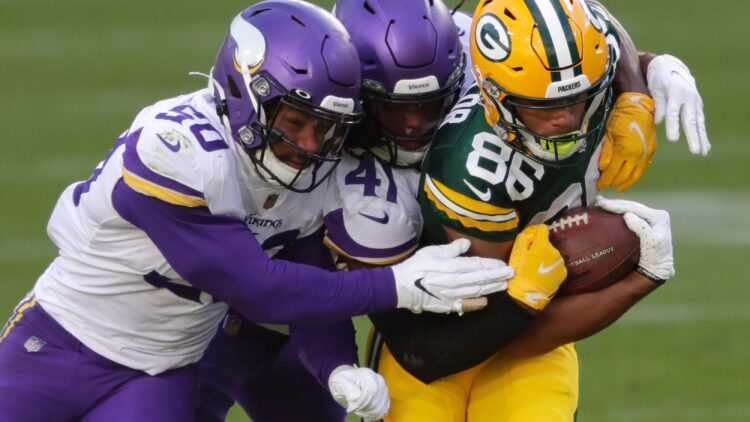 The Vikings have several quality wins during this rollercoaster season but, Minnesota can make a resounding statement that they are in the playoff mix if they can beat a Packers team on Sunday that currently holds the NFC’s top seed.

The Vikings were victorious the last time the two teams met, a 28-22 thriller in 2020 at Lambeau Field when Dalvin Cook scored four touchdowns and D.J. Wonnum’s last-minute strip-sack of Aaron Rodgers iced the game. That was Packers Coach Matt LaFleur’s first and only loss against NFC North opponents (he currently stands 13-1 including a season-opening 43-34 road win over the Vikings last year in which Rodgers threw four TD passes, but he benefited from a quiet stadium with no fans in attendance).

Minnesota hopes to return several key defensive starter — Harrison Smith off the COVID list and Patrick Peterson and Anthony Barr coming off injuries. The defense played well in L.A. without them, but they’ll need as many of their top players as possible to contain the Green Bay offense. The biggest challenge may be for the Vikings offense to solve a solid Packers defense that ranks third overall despite key injuries and just shut out the Seahawks.

This should be an exciting game and atmosphere at U.S. Bank Stadium.

Here are my keys to the Vikings beating the Packers:

1. Stay aggressive on offense, mixing in a strong dose of Dalvin Cook with some downfield passing as occurred last week. In the win last season at Green Bay, Cook rushed for 163 yards and had two receptions for 63 yards including a perfectly executed screen for a 50-yard TD. If the Packers load eight in the box to try and stop Cook, Cousins must audible to downfield throws to his talented receivers.

The Packers have improved their defense significantly so far this season, but the Vikings bring the league’s seventh-ranked offense and a potentially balanced attack. This game calls for another mix of running and passing and controlling the time of possession to keep Rodgers and Co. on the sidelines as they did last week (36-24 minute edge over the Chargers).

2. Double-digit targets to Justin Jefferson. Last week, it was 11 targets, 9 catches, 143 yards, and numerous game-changing plays by the second-year star. Cousins must throw to Jefferson and Adam Thielen on intermediate and deeper routes even if they’re double covered against the Packers secondary. Green Bay is missing its best corner in Jaire Alexander, and don’t forget about possible favorable matchups for Tyler Conklin (two TDs last week) and K.J. Osborn.

Also expect to see more screens to Cook and Alexander Mattison to slow down the Packers pass rush.

3. Whither Garrett Bradbury? Mason Cole did a fine job at center in place of the COVID-stricken Bradbury the past two weeks, and I would keep him in the lineup since he’s been the more consistent player. Based on the portion of practice open to the media, it appears Cole will start, but if Bradbury gets the nod, he should be on a short leash coming off his two-week absence, and since he’s had a lot of trouble in the past with Kenny Clark, one of the NFL’s best nose tackles. Regardless of who starts, double teams are in order on Clark, and it helps that the Packers are missing their best pass rusher who is on injured reserve — Za’Darius Smith. Green Bay’s leading tackle is ex-Golden Gopher De’Vondre Campbell.

4. On both sides of the ball, fewer penalties. Mike Zimmer surely is emphasizing this factor that was ugly in L.A. (10 for 118 yards). The O-line must stop putting the offense into difficult situations with excessive holding. Playing well on third and fourth downs also is a key and was better last week on offense and defense.

5. Stop the run, pressure Rodgers, and double cover Davante Adams. Good news for the Vikings is Green Bay will be without their excellent starting back Aaron Jones. They’ll need to gang tackle the stout A.J. Dillon, a 247 pounder who scored two TDs last week. Then, the challenge as always is to pressure Rodgers with the league’s top pass rush (29 sacks but missing Danielle Hunter).

Zimmer called a great game with timely blitzes on Justin Herbert last week, but the wily vet Rodgers will be looking to throw quick to his star receiver, Adams, if the Vikings bring the heat via the front four and Eric Kendricks (four sacks) plus some safety blitzes from Smith and Cam Bynum when he plays in certain packages.

We’ll see if Rodgers’ mobility is limited by a toe injury that caused him to miss practice time this week. Rodgers said he always expects “some special wrinkle” from Zimmer and the Minnesota D. All-Pro left tackle David Bakhtiari has not practiced this week, so it appears he’s not quite ready to return from his knee injury.

Adams — one of the NFL’s best receivers (65 catches for 864 yards and 3 TDs this season) — torched the Vikings young corners last year (14 catches, 156 yards, 2 TDs in the opener and three TD receptions in the second meeting). I feel better about the Vikings’ chances to contain Adams if Peterson is playing effectively as he did before his hamstring injury but he’ll need safety help, and perhaps Kendricks can pitch in as he did with his great interception while assisting in coverage on the Chargers’ top receiver Kennan Allen.

The Vikings other corners will be tested with some deep shots by Rodgers when they’re in single coverage against the Packers’ other fine receivers. Zimmer praised his corners for their play against the Chargers but I still see Bashaud Breeland as shaky and Cam Dantzler as the better player overall yet still inconsistent. It helps the Vikings not to face an excellent tight end in Robert Tonyan who is out for the season.

6. Don’t sit on a lead. The Vikings must resist the temptation to go conservative unless Cook is having a big day on the ground. There have been too many games this season that the Vikings have not put the other team away.

7. Special teams can make a big impact in what should be a close game. Greg Joseph has kicked well lately and needs to continue that positive trend while the Vikings return game has suddenly become one of the league’s best with Kene Nwangwu on kickoffs and Dede Westbrook on punts making big returns the last two weeks.

8. Fans need to be loud as usual. Rodgers feasted on a quiet U.S. Bank Stadium last year so Vikings fans must make it difficult for the Packers offense.

Jeff’s Prediction: I see another close game that could go either way. The Packers are missing a lot of key players yet have continued to play well especially on defense, and I’m not convinced the Vikings can get enough heat on Rodgers to help the secondary. I’m hoping the Vikings play well enough to win, but I’m picking Green Bay 27-24.

Around the NFL Observations:
1. The Vikings can reclaim the NFC’s No. 7 playoff seed with a win combined with Washington upsetting Carolina (and the Panthers’ new/old QB Cam Newton) or the Eagles beating the Saints in Philly.

2. Minnesota hopes the NFL’s upset trend continues this week especially for them against the Pack after six underdogs won last weekend (including the Vikings and Minnesota’s next opponent San Francisco who crushed the Rams). Meanwhile, Tennessee won its sixth straight including five wins over 2020 playoff teams and Patrick Mahomes returned to top form with five TD passes as the Chiefs walloped the problematic Raiders.