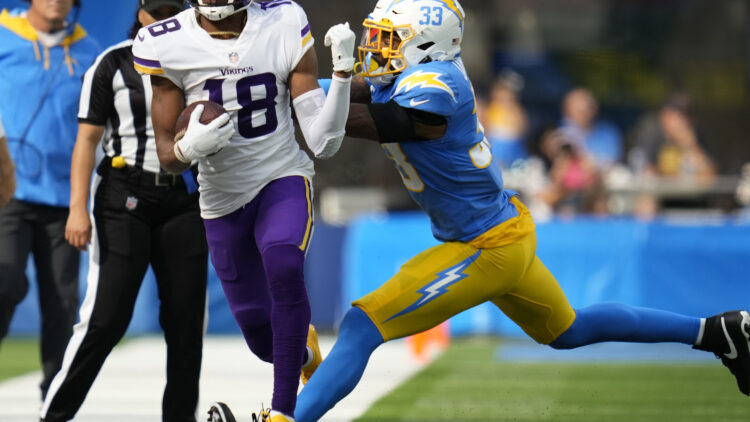 Foreman has played with a few of them and liked them all.

He really likes Jefferson and when asked during the “JimBob Sports Jam” podcast if he considered Jefferson a hybrid of Cris Carter and Randy Moss, he didn’t hesitate to say he did.

“The Vikings hit the jackpot with Justin Jefferson,” Foreman said.

“He’s got all the things you need to have physically and it seems mentally one of the top receivers we’ve ever had up here. He runs a heck of a route. He catches everything you throw at him. He has no fear going across the middle. All the things a wide receiver needs to have to go to that level. I think he’s on his way there. He’s definitely going to be one of the best to play.”

Moss was devastating to defenses as a deep threat and nobody was better on moving the chains with a catch along the sidelines than Cris Carter.

Jefferson can do those things, too. He can go way, way up to make a catch or lean over the sideline — with both feet inbounds, of course.

In just a season and a half, Jefferson has put up Moss-like numbers and, if he goes through his career without a major injury, he might even supplant Moss as the greatest receiver in Vikings history.

That would be an incredible accomplishment. Moss already has gone down as one of the best two or three receivers in NFL history. Only Jerry Rice, it can be argued, was better.

Jefferson can be that good. Jefferson already is so damn good.

You can hear all of Chuck’s comments about Jefferson as well as running back Dalvin Cook and the current state of the Vikings on the accompanying segment from The JimBob Sports Jamboree.

Chuck Foreman is a co-host of The JimBob Sports Jam with Fox 9 sports director Jim Rich and BS Show host Bob Sansevere. Their weekly podcast also is broadcast on radio stations across the state and can be found on your favorite podcast platform.