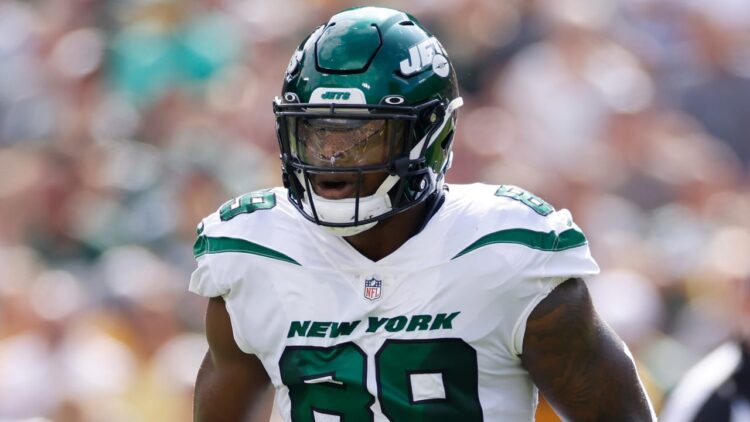 On August 31st, 2021 the Minnesota Vikings traded a 2022 4th round draft pick to the New York Jets in return for a tight end named Chris Herndon. A fourth round pick himself back in 2018, Herndon hadn’t latched on in New York and when the opportunity presented itself to get an equal return on their investment, the Jets took it.

On the other side of that trade, the Minnesota Vikings were grasping at straws. You see, behind the scenes they had just received information that their upstart tight end Irv Smith Jr. was likely to miss the entirety of the 2021 season. On tap to be a big part of the Vikings offense this season, the Vikings were looking to fill some decent sized shoes and apparently didn’t think that in house candidate Tyler Conklin could handle that load on his own. So they went out of house and found an option in Herndon.

To date Herndon has appeared in 50 snaps on the season and his most notable contributions came this last weekend when he was dinged for two poorly timed penalties against the Lions.

Suffice it to say, the return on investment for this deal has not been in favor of the Minnesota Vikings so far. Now you could easily say, “it’s a fourth round pick, who cares”, but that’s not the right way to think when building an NFL roster. Sure, 4th round picks are not 1st or 2nd round picks, but those players still play integral roles on an NFL roster and some break through and come into their own in the league. You’ve heard that Tom Brady was a 6th round pick right? Or that John Randle and Adam Thielen were both undrafted? You never know what you’re going to get in the draft, so throwing picks around willy-nilly can be concerning.

Unfortunately for the Vikings it also follows a bit of a trend of Minnesota hitting the panic button to make a trade that for one reason or another blew up in there face.

Last month, Dustin Baker, broke down the comparison between the Herndon trade and the Yannick Ngakoue trade the Vikings made before last season. While he was right in highlighting some of the differences between the two trades including value of draft picks and potential outlook for what could have been, what if we look at that situation a little differently. What if the best case scenario we were all dreaming of with Hunter on one side and Ngakoue on the other wasn’t the only reason they made the move?

Now this is by no means an attempt to call the Vikings actions and words dishonest, but it is possible that there were multiple contingency plans with bringing Ngakoue in. Of course it would be great if Danielle and Yannick could wreak havoc on opposing backfields, but in the event that Hunter didn’t come back, well at least they still had Yannick on one side. The Vikings missed out on bringing Everson Griffen back after a Pro Bowl season in 2019 and didn’t have much depth behind him on the right side, so they made a move.

In hindsight, that move was up there for one of the worst in team history. Herschel will always take the cake, but straight up losing a second round pick for a six game rental player and only getting a 3rd in return is a significant loss of value, especially considering the lack of a second round pick in the 2021 draft dramatically altered the teams plans on Draft Weekend.

But this trend goes back even further  as well.

Go back one year to a moment in time where the organization was freaking out about their kicker situation…you know that one time where that happened (insert eye-roll emoji here). The Vikings made a preseason trade with the Ravens for Norwegian kicker/punter Kaare Vedvik who was set to come in and challenge either of Dan Bailey for kicking or Matt Wile for punting. The price was a 5th round pick and it was completely wasted as the team cut didn’t beat out either and was waived just two weeks later.

Now jump back to 2016. Teddy Bridgewater had just suffered a catastrophic injury on the practice field and the Vikings were left to scramble. In an attempt to salvage a season they though they could compete in, Minnesota made a move to bring in another quarterback, Sam Bradford. The Eagles were on their way to starting rookie QB Carson Wentz early that season and the Vikings bought a quarterback with a degenerative knee issue at the price of a king’s ransom, a 1st round pick in 2017 and a conditional pick. Bradford did play most of the 2016 season leading Minnesota to a 7-8 record missing one game along the way. The following year, he started two games, went down to injury and never made it back onto the field for the Vikings.

Outside of the Vedvik deal which happened during the middle of August, the three other trades mentioned above happened between a 4-5 day window of time after the preseason and before the regular season began. They were moves the team wasn’t necessarily planning on making but because of injuries might have jumped into the market to fill a hole.

Stemming from the Bradford trade, there was an interesting quote from Vikings general manager Rick Spielman who said, “The one thing that I will not do, and I promise you this, is put our organization in a situation where it’s going to inhibit us or hurt us going into the future.”

Now, for an organization that has in its history the Herschel Walker trade, this statement is delivered to a bit of a skewed audience. No, the Bradford trade was not on par with the Walker trade back in 1989. No trade in the history of the league will ever top that one, but one could argue that for a team that has yet to get their offensive line right some 5 years later, the future was certainly impacted by the loss of the 1st round pick in 2017, the 4th in 2018, the 5th in 2020, the 2nd in 2021 and potentially the 4th in 2022 that were all sacrificed to fill a position right before the season. You’re not going to hit home runs on all of those picks, but odds would tell you that something productive should have come out of those five picks shipped off for trades.

There’s a narrative that we hide behind to cover up some of these moves. You know the whole, “well the Vikings walked away from the draft with 10, 11, or even 12 draft picks this season” idea. It’s been used to make us feel like the group turned a molehill into a mountain and the bounty is sure to be plentiful. But when that bounty doesn’t bear as much fruit as you had hoped, we’re left to sit and look back at some  of the moves made under dire circumstances that also didn’t work out in the long-term.

All of this said, I hope Chris Herndon breaks out this week and makes us forget names like Tony Gonzales, Travis Kelce and Gronk…but based on what we’ve seen so far, I’m not holding my breath…like not at all.