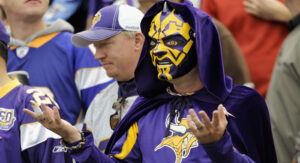 Anybody who has been a Minnesota sports fan for more than, let’s say, 10 years should know by now that it’s dangerous to get our hopes up. We’ve been burned so many times before when “this was gonna be our year”, or “this is the team of destiny”…it all ends the same. Our team, along with our fans, usually watch most of the playoffs and certainly whatever championship game from their couches, in the comfort of their homes.

Regardless, we’re on the cusp of another season of Minnesota Vikings football and we’re getting excited for the prospects of what could be, again. With the potential upheaval within the division, visions of the playoffs and a home game along the way are dancing through our heads. I would know, I’m one of you. This has been my life as a Minnesota sports fan. Spoiled as a young kid with two World Series and despondent ever since.

That’s the mental standpoint from which this article was born.

I’m scared that we feel good about this upcoming season. I’m scared that we’re of the mindset that “it can’t be worse than last year.” I’m scared that I’m hearing people say, “now that we have [insert unproven/aged commodity here] we’re on our way to the top!” Those are the bad omens that we see and hear in this state right before the bottom falls out.

I’m sorry, it’s just reality and you can argue with me all you want, but you know it’s true.

So with that, here are the FIVE BIGGEST FEARS that I have heading into the 2021 Minnesota Vikings season…

1. What if Danielle Hunter doesn’t show up/forces his way out?

It’s the biggest talker across the State of Purple no doubt, and we’re just a few days away from getting a big tell on just how big the divide is between the Minnesota Vikings and Danielle Hunter. Whether you believe that Hunter wants to be the highest paid pass rusher, or whether you believe that he wants out of Minnesota, one thing is clear. Danielle Hunter isn’t exactly happy with his current “team friendly” contract that was worked out a few years back. He’s for sure outplayed his contract, but he’s also coming off of a full missed season due to a neck injury, that’s not exactly an ideal injury for someone who will be battling in the trenches. So what’s the reasonable middle ground? Both sides seem to have some leverage here, can they find an agreeable middle point that gets Danielle back on the field this season?

If they don’t, we’ve got a HUGE problem!

Even with Danielle on the field, there are questions about the defensive end position opposite Danielle. Right now, it’s a hodge-podge of players that will be battling it out for that spot and we’ll likely see lots of rotation to keep fresh bodies out there. That’s not ideal. We saw how big a negative impact not getting pressure on opposing quarterbacks had on the entirety of the Vikings defense last year. If quarterbacks have all day to pick apart the defense and if running backs just have to run away from Hunter, we’re gonna give up some yards. That leads to giving up some points. And that leads to losses.

2. What if the rebuilt offensive line doesn’t work out?

At this point in the offseason we’re putting a lot of optimism in on this rebuilt offensive line. If it shakes out the way that we think that it will, we’ll see Ezra Cleveland moving from right to left guard and rookies Christian Darrisaw and Wyatt Davis filling in at LT and RG. That’s a lot of movement and a lot of unproven hope we’re putting in some young players to do big things.

What if they don’t fill in and improve the offensive line like we’re hoping?

It’s a very real possibility. I mean, these guys were good in college, but they haven’t proven anything at the next level. We’ve heard that there is big jump in speed, strength and scheme for offensive lineman, let’s hope that they don’t wet the bed along the way.

3. What if Aaron Rodgers does return to Green Bay?

Let’s go outward facing for point number three here. We’re all assuming that it’s a disaster zone in Green Bay. From the outside looking in, that’s all we can expect it to be with Jordan Love and three others under center for Packers Mini Camp this week. But what if Aaron and the Packers iron things out at Lambeau and the reigning NFL MVP is back on the field for The Pack?

[This is the point in the article where I remind you that Rodgers has a 108.5 career passer rating against the Vikings.] 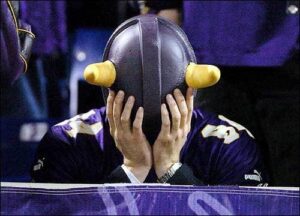 4. What if the newly found depth at CB is actually rather thin?

Along with putting blind faith in our young and unproven offensive line, don’t ya think we might be putting a little too much hope in an aged and unproven defensive backs unit as well?

I’d lean towards the thought that Jeff Gladney will be unavailable this season and maybe not factoring into future plans at all, there were no CBs drafted this year, and while anyone on roster from last year has another year of experience, there still a long row to hoe for noted cornerback whisperer Mike Zimmer and the unproven Vikings CBs.

5. What if the WR3 we keep talking about is already on the roster?

There’s been a lot of talk about this whole wide receiver three and the Vikings lack of one. I mean, the top line of Adam Thielen and Justin Jefferson looks really good, but exactly how important is this WR3 spot? For most teams it might not be a huge deal, but we need to remember something here with the Vikings. Not only is there a void at the WR3 spot, but Kyle Rudolph is no longer here as well. I say this because with the Vikings there would be some across the middle responsibilities that the team would look for from a WR3 and that void could be larger with Rudy gone.

It’s possible that Irv Smith Jr. fills in as a better pass receiving option than Rudolph…or it could go the other way. That’s yet to be seen.

So if that WR3 ends up being Chad Beebe, or Bisi Johnson, or Ihmir Smith-Marsette…will we be okay?

Then there’s the worst case scenario that all five of these possibilities come true…there’s no pass rush off the edge cuz Danielle has forced the Vikings hand, with all the time in the world Aaron Rodgers returns and puts the Vikings down double digits in the first quarter, they can’t fight back because they can’t protect Kirk long enough to get big chunks of yards, CB depth remains shallow so A-Rodg targets the most inexperienced cornerback on the field and outside passing options get locked down with no trustworthy options to pass to across the middle.

But that’s all hypothetical, there’s probably nothing that we have to worry about you guys…

HAVE A GREAT DAY EVERYBODY!

Jack Day and I discussed this and so much more on the latest episode of The State of Purple Podcast this week. Catch the entire episode and talk me off the ledge in the player below…