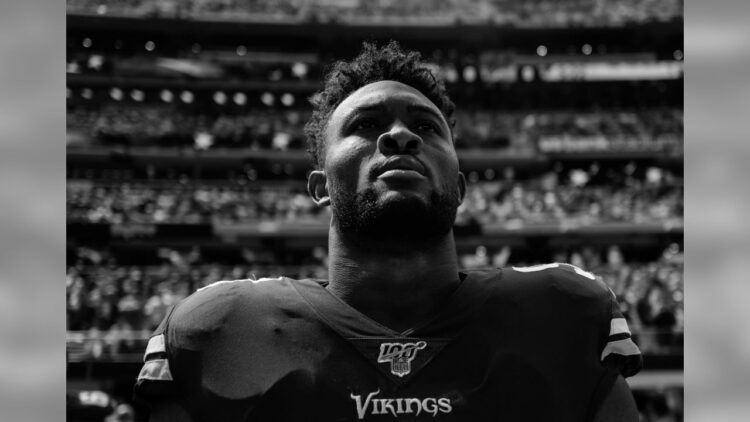 Do me a favor.

Before you read/comprehend what I’m about to tell you, go out to your nearest sidewalk and lick a good 3-4 inches of pavement until your taste buds recoil from the grain(s) of salt you just lapped up.

Point being: Take the following with s grain of salt (and sand, and 3M chemical laden melt water).

Minnesota Vikings general manager Rick Spielman made some news Wednesday as he discussed multiple things with reporters during a press conference. In addition to putting the kibosh on all the speculative Kirk Cousins trade “rumors”…

Which you can read about here on our sister site purplePTSD :

Many people have speculated or mountain out-of-molehilled that Hunter is unhappy with his contract. As the best edge rusher in the league and one that had broken many a record by the age of 25, Hunter is drastically underpaid for his services despite the fact that he is still under contract for the next three seasons.

Hunter missed the entire 2020 season thanks to a herniated disk in his neck, an injury that many have questioned whether he’ll be able to bounce back from.

Spielman provided some semblance of an update that was worded poorly and gave the impression that Spielman is getting updates on one of his most important players the same way that I check to see if my fiance is mad at me. Instagram.

“From all indications of where he’s at in his rehab right now, I saw an Instagram picture of him yesterday. He looked pretty good. Excited to get him back here in the fold and get him going once we get started,” Spielman said.

Now, I’m sure that Spielman knows a lot about specifically where Hunter is in his rehab, but it sounded like he was just checking Instagram as if Stefon Diggs was still a Viking and he wanted to get angry before a jog.

What about Hunter’s contract situation? This breakdown from Pro Football Talk explains:

“Spielman said “no” when asked if Hunter has asked the team to make him the highest-paid defensive player or trade him, but otherwise declined to discuss contractual matters. He did say that the team expects to have him back from the injury.”

That’s not entirely a sign that Hunter is completely happy with his contract situation, as Spielman instead was simply no dealing very specific aspects of that subject. It’s a good sign that Hunter hasn’t requested a trade or asked to be the top defender in the league, something that may be different if not for his injury status.

First off, it’s unclear whether or not Hunter would even pass a physical to get a trade okayed. Secondly? He is smart enough to know that now most likely isn’t the best time for him to ask for that massive of a raise as he needs to prove that his injury is healed and a non-factor and also wait for, you know, the Vikings to be able to actually afford such an restructure.

But I guess we should be relieved that things aren’t at that breaking point (yet).